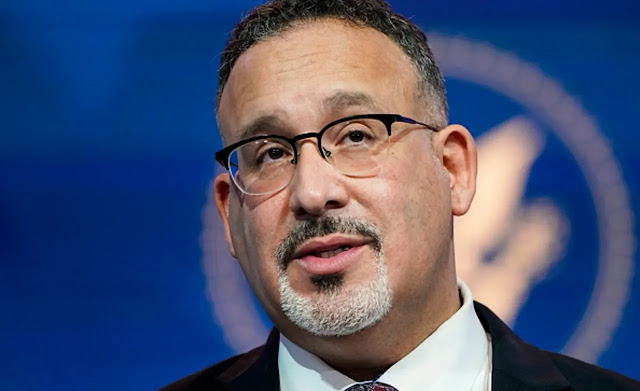 The Biden administration on Wednesday announced several new proposed changes to the federal student loan system, including measures that help discharge loans for physically and mentally disabled borrowers, limit interest capitalization rates, and help borrowers working as public service employees to earn forgiveness on their loans.
In a statement unveiling the proposed expansion of student loan discharge programs, the Department of Education said it expected to finalize a full plan by Nov. 1, with the aim to have the changes take effect no later than July 1.
Secretary of Education Miguel Cardona said in the statement that proposed changes “will protect borrowers and save them time, money, and frustration, and will hold their colleges responsible for wrongdoing.”
“We are committed to fixing a broken system. If a borrower qualifies for student loan relief, it shouldn’t take mountains of paperwork or a law degree to obtain it,” Cardona said in a statement. “Student loan benefits also should not be so hard to get that borrowers never actually benefit from them.”
The Biden administration has so far canceled nearly $26 billion for more than 1.3 million borrowers since taking office, much of which included loans obtained by borrowers who were defrauded by their college or had their school close down before they could complete their education.
The changes proposed for the federal student loan system on Wednesday would make it easier for borrowers to file and pursue claims of predatory practices by colleges. The proposed rules would also help students who enrolled in schools 180 days prior to a school closure and who didn’t complete their education to more easily discharge the loans.
In a statement, James Kvaal, the undersecretary of Education, said that “borrowers have had to navigate narrow rules and a needlessly complicated system” when attempting to cancel loans they should be able to easily discharge.
“What’s worse, borrowers whose schools lied to them can’t pursue litigation because restrictive and unfair arbitration requirements and class action bans were foisted on them by their colleges,” Kvaal said. “Borrowers should not have to jump through hoops to get the relief they deserve.”
Since October, the Biden administration has approved about $8.1 billion in student loan relief for 145,000 borrowers after rolling out changes to Public Service Loan Forgiveness (PSLF), which grants loan forgiveness for those serving full time in certain public service positions.
The changes to PSLF include a waiver that bypassed certain program requirements and granted borrowers credit toward loan cancellation, regardless of the type of federal loan. The waiver will expire at the end of October.
Wednesday’s announcement proposes a permanent change to PSLF that would allow more payments to qualify for the program, including partial, lump-sum and late payments. It also would allow particular kinds of deferments and forbearances to count toward PSLF, and it would create a formal reconsideration process for applicants who were denied access to the program.
Other proposals include eliminating interest capitalization rates on loans for borrowers in certain instances, making it easier for permanently disabled borrowers to qualify for loan forgiveness, and giving borrowers an easier path toward loan forgiveness if they were falsely certified and ineligible for a loan.
The Biden administration has also floated the idea of canceling $10,000 per borrower amid calls from progressives to cancel $50,000 or more per borrower.
In May, deputy press secretary Vedant Patel said that “no decisions have been made,” but sources said in late April that the president had settled on that number and was working on the specifics of providing such debt relief.
National