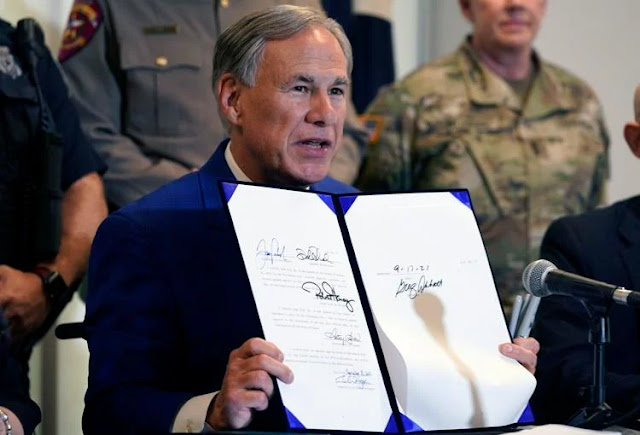 By Bethany Blankley
Gov. Greg Abbott on Thursday issued an executive order authorizing and empowering the Texas National Guard and the Texas Department of Public Safety to apprehend foreign nationals who illegally cross the Mexican border into Texas and return them to the border.
Abbott made the announcement two days after six county judges in Texas issued declarations of invasion and called on him to do likewise.
Those attending the press event with the judges, including Ken Cuccinelli, senior fellow at the Center for Renewing America, say Thursday's order appears to only facilitate a statewide catch and release program, which is no different than what the Biden administration is already doing.
“The Biden administration's decision to end Title 42 expulsions and the Remain-in-Mexico policy,” Abbott said, “has led to historic levels of illegal crossings, with 5,000 migrants being apprehended over the July 4th weekend, creating a border crisis that has overrun communities along the border and across Texas.”
Title 42 was a pandemic-related policy that allowed border agents to more quickly expel immigrants to prevent the spread of COVID-19. Remain in Mexico was a Trump-era policy that returned migrants to Mexico as their asylum cases moved through U.S. immigration courts.
"While President Biden refuses to do his job and enforce the immigration laws enacted by Congress, the State of Texas is once again stepping up and taking unprecedented action to protect Americans and secure our southern border," he added. "The cartels have become emboldened and enriched by President Biden's open border policies, smuggling in record numbers of people, weapons, and deadly drugs like fentanyl."
In the executive order, Abbott stated that the Biden Administration "has abandoned the covenant, in Article IV, § 4 of the U.S. Constitution, that '[t]he United States . . . shall protect each [State in this Union] against Invasion,' and thus has forced the State of Texas to build a border wall, deploy state military forces, and enter into agreements as described in Article I, § 10 of the U.S. Constitution to secure the State of Texas and repel the illegal immigration that funds the cartels."
In it, he authorized the Texas National Guard and Texas Department of Public Safety to begin returning foreign nationals who entered Texas illegally to the border “to stop this criminal enterprise endangering our communities."
He also cited Article IV, § 7 of the Texas Constitution and Sections 431.111 and 437.002 of the Texas Government Code authorizing him to direct state military to enforce the law.
But Center for Renewing America President Russ Vought and Senior Fellow Ken Cuccinelli said the order means “no significant changes to current policy. This is still catch and release.”
In a joint statement, they said, “We acknowledge Governor Abbott’s recognition that the facts on the ground along the border comport with the Constitution’s understanding of an invasion.
“However, the Governor does not appear to formally declare an invasion nor direct the National Guard and Department of Public Safety to remove illegals across the border directly to Mexico. That is critical. Otherwise, this is still catch and release.”
Kinney County Attorney Brent Smith told The Center Square, "This move may be a positive step in having the supreme court revisit Arizona v. US, but the directives of this order will simply result in illegal aliens being detained in Texas and released in Texas. Without declaring an invasion and invoking the self defense clause under Article 1, the lawlessness and violence occurring on our border with Mexico will continue to be allowed by DHS and their unconstitutional immigration policies."
JoAnn Fleming, president of Grassroots America-We The People PAC, told The Center Square, “The devil is always in the details. We ask Gov. Abbott to provide details.”
She also asked, “So, they will drop them off on the Texas side of the border? Then house, feed and provide health care? Is he about to put up tent cities along the border?
“He’s not repelling any illegal. Operational control of the border means no illegal entry allowed.”
Goliad County Judge Mike Bennet and Goliad County Sheriff Roy Boyd told The Center Square in a joint statement, "We support Governor Abbott's move in this direction. However, until a declaration of invasion is issued, the State of Texas does not possess the legal authority to remove illegal aliens from the United States. The only two ways to solve the problem are to enact a declaration of invasion or put enough economic pressure on Mexico and make them bring this mass movement to an end in their country.
"We hope that a declaration of invasion is enacted or another viable solution will be implemented as soon as possible. Governor Abbott has shown that he is willing to act when action is required, and we have faith that he will once again take every lawful step necessary to bring this dire situation to an end. Until then, we will continue to do our part to prevent and suppress criminal activity brought to our doorstep by this invasion of transnational organized crime."
Robert “Beto” O’Rourke, the former Democratic congressman from El Paso who’s running for governor against Abbott in November, argues that “Abbott has created chaos and confusion at the border. He disrupted the lives of border communities and sent 10,000 Texas National Guard members to the border to serve as the backdrop for his photo ops, taking them away from their jobs and families while slashing their earned benefits, delaying their pay, and forcing them to live in terrible conditions,” according to a statement on his campaign website.
“I will never use border communities or law enforcement as a political prop,” he said. “Instead, I will work with Texans – regardless of party – to develop the immigration and border security reforms that will allow us to have a legal, orderly system of immigration and uphold our country’s asylum laws.”
Posted by High Plains Pundit on July 07, 2022
Email ThisBlogThis!Share to TwitterShare to FacebookShare to Pinterest
Tags: Texas