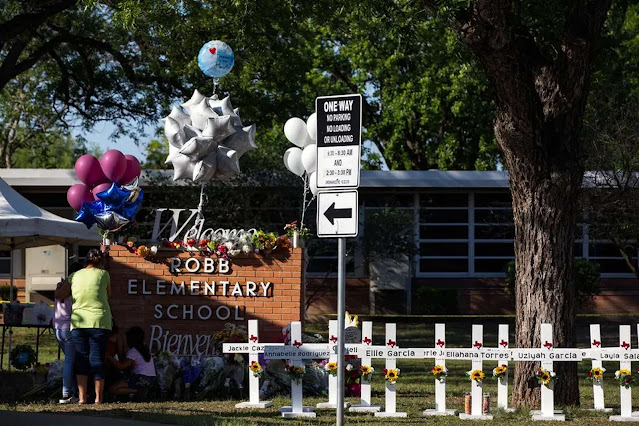 The superintendent of the Uvalde, Texas, school district announced on Wednesday that students will not be returning to Robb Elementary School after the mass shooting there last week that left 19 children and two adults dead.
“Students and staff will not be returning to the Robb Elementary campus. We are working through plans on how to serve students on other campuses and will provide that information as soon as it is finalized. We are also working with agencies to help us identify improvements on all UCISD campuses,” Uvalde Consolidated Independent School District Superintendent Hal Harrell wrote in a letter, which was also on behalf of the district’s board of trustees.
Harrell wrote that the school is continuing to cooperate with authorities on the shooting and would be providing counseling services to staff and families “for the foreseeable future.”
The superintendent noted they would not be commenting on the investigation into the massacre until a review had been completed by law enforcement, noting it “is ongoing and information is evolving.”
There is increasing scrutiny over authorities’ response to the shooting, given a more than hour lapse between when the gunman entered the school and when law enforcement killed him. Discrepancies have also emerged in the original version of events as detailed by police.
Meanwhile, the shooting has reigniting the national conversation around gun violence, with Democrats in Congress pledging to hold votes on gun law reform.
Posted by High Plains Pundit on June 02, 2022
Email ThisBlogThis!Share to TwitterShare to FacebookShare to Pinterest
Labels: Texas