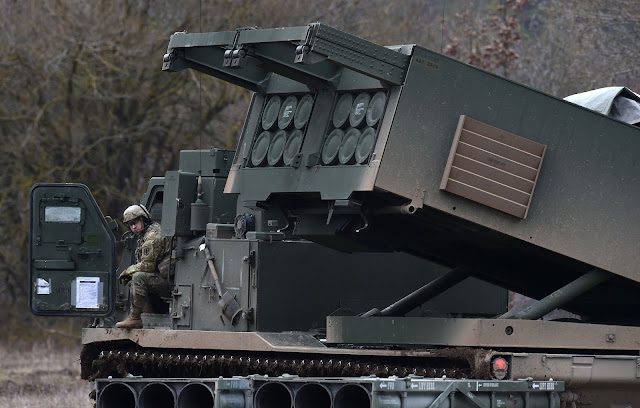 The Biden administration will send long-range rocket systems as part of a $700 million weapons package to Ukraine, senior administration officials told reporters on Tuesday night.
The new package is set to include High Mobility Artillery Rocket Systems (HIMARS) and munitions to allow Ukrainians to more precisely strike targets from a greater distance inside Ukraine, the officials said.
The official added that the systems would be used to repel Russian systems; they would not be used inside Russian territory.
The news comes following conflicting messages from the White House after multiple news outlets reported that the administration was preparing to provide Ukraine with U.S.-made Multiple Launch Rocket Systems, which can fire rockets up to 300 kilometers.
Biden told reporters on Monday that the U.S. was “not going to send to Ukraine rocket systems that strike into Russia,” as there are concerns about escalating the war into a larger conflict.
But in a guest essay for The New York Times published on Tuesday, the president alluded to sending Ukraine the rocket systems, saying in part, “We have moved quickly to send Ukraine a significant amount of weaponry and ammunition so it can fight on the battlefield and be in the strongest possible position at the negotiating table.”
“That’s why I’ve decided that we will provide the Ukrainians with more advanced rocket systems and munitions that will enable them to more precisely strike key targets on the battlefield in Ukraine,” he continued.
The HIMARS is a lighter wheeled system that can fire many of the same types of ammunition as the MLRS. One official said that U.S. was comfortable with giving Ukraine the systems after receiving assurances from Kyiv that they would not use them to fire into Russian territory.
In addition to the HIMARS, the package will include air surveillance radars, Javelin anti-tank missiles and anti-armor weapons, another official said.
It will also include additional artillery rounds, helicopters, tactical vehicles and a spare parts package to allow Ukraine to maintain the systems it has already been provided.
The package is the 11th that the U.S. has provided under presidential drawdown authority, which allows the Pentagon to pull from its own weapons stockpile. It is also the first to be sent from the $40 billion supplemental package for Ukraine that Congress passed earlier this month.
The U.S. has sent $5 billion in security assistance to Ukraine since the start of the Biden administration, of which $4 billion has been sent since Russia’s invasion of Ukraine began.
Posted by High Plains Pundit on June 01, 2022
Email ThisBlogThis!Share to TwitterShare to FacebookShare to Pinterest
Labels: World