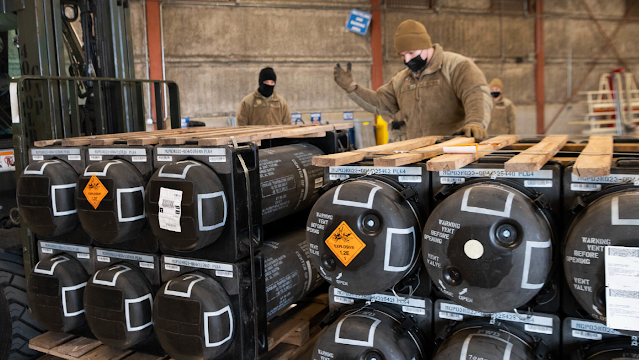 Ukraine is pleading for heavier weapons and more ammunition as Russia has focused its efforts in the country’s eastern Donbas region, a fight taking place amid a brewing debate over whether Ukraine should cede some of the land in an effort for peace.
Even with the Biden administration’s new commitment of $1 billion in lethal aid that was announced last week, Ukrainian officials say it’s still not enough (by a long shot) to beat back Kremlin forces.
Ukraine has received far less than what it has asked for to help stave off the Russian offensive, only 10 percent of the weapons it requested from Western nations, according to Ukrainian officials.
Such needed aid may be far from making it to Ukraine. NBC reported last week that President Biden in April asked Defense Secretary Lloyd Austin and Secretary of State Antony Blinken to tone down their rhetoric supporting Ukraine in its war.
While the Biden administration has maintained that it will not pressure Kyiv to end the war, behind the scenes, U.S. officials are growing worried that Ukraine’s views not to cede any land are untenable, according to the report.
The “cooling the victory conversation might be in recognition of the fact that the war looks like it is going to be dragging on for a while, whatever happens. Talking about victory may create frustration with the long war,” Cynthia Cook, director of the Defense-Industrial Initiatives Group at the Washington, D.C.,-based Center for Strategic and International Studies, said.
Biden on Tuesday acknowledged that drawn out timeline, telling reporters he believes “at some point, this is going to be a bit of a waiting game. … What the Russians can sustain and what Europe is going to be prepared to sustain.”
He said he would discuss the issue with allies next week when he travels to Madrid for the NATO summit.
Publicly, the U.S. has maintained a strong commitment to Ukraine, with top U.S. leaders defending Washington’s efforts to equip Ukraine so far, brushing off criticisms that Western nations have not done enough.
U.S. Attorney General Merrick Garland on Tuesday made an unannounced trip to Ukraine, where he expressed “the unwavering support of the United States for the people of Ukraine in the midst of the unprovoked and unjust Russian invasion.”
And Joint Chiefs of Staff Chairman Gen. Mark Milley was with Austin in Brussels last week to meet with officials from nearly 50 other nations to coordinate the delivery of needed weapons into Ukraine.
But comments have emerged from former U.S. officials suggesting that Ukraine end the slog of their defensive by ceding some territory to Russia in the name of peace.
Those include former U.S. Secretary of State Henry Kissinger who said earlier this year that “negotiations on peace need to begin” between Moscow and Kyiv and that “ideally, the dividing line should return the status quo ante.”
Ukrainian President Volodymyr Zelensky quickly slammed the 98-year-old Kissinger for his comments, fiercely defending Ukraine’s refusal to relinquish its lands and pleading for help in their endeavor.
“No matter how hard Ukraine tries, no matter how professional our army is, without the help of Western partners we will not be able to win this war,” Deputy Defense Minister of Ukraine Anna Malyar said June 14.
That same day, Zelensky pressed for more heavy weapons including long-range fire systems and armored vehicles, criticizing some European leaders for “restrained behavior” which he claimed has greatly slowed down arms supplies.
“I am grateful for what is coming, but it must come faster,” he told Danish journalists in an online briefing, noting that Russia has “hundreds of times more equipment and weapons” than Ukraine.
The only tenable solution, Ukrainian officials argue, is parity of weapons between the two sides if Kyiv is going to be successful in a counteroffensive.
The pleas come as Russian forces have steadily made headway in Ukraine’s eastern Donbas region, pummeling towns and cities in its path with near-constant shelling. The Kremlin troops are currently attempting to overtake the potentially decisive battleground of Sievierodonetsk, one of Ukraine’s last strongholds in its industrial heartland.
The situation is made more dire because Ukraine is outnumbered and out-gunned 10-to-1 compared to their Russian counterparts, Ukraine’s Deputy Defense Minister Hanna Maliar told Politico last week.
U.S. officials have acknowledged the heavy pressure on Ukrainian forces, with Milley on June 15 noting that Ukraine is losing about 100 soldiers per day, on top of up to 300 wounded per day.
But both Austin and Milley have pushed back against the idea that Washington has been too slow in its decision to send heavier weapons such as howitzer artillery systems and High Mobility Artillery Rocket Systems (HMARS). Milley argued that “no singular weapons system ever, quote unquote, turns the balance.”
While U.S. officials have acknowledged that Russian forces are advancing in the Donbas region, they have characterized the movement as “very slow, a very tough slog, very severe battle of attrition, almost World War I like,” according to Milley.
National security adviser Jake Sullivan said last week that it’s up to the Ukrainians to ask for as many as heavy weapons as possible, while the U.S. takes on the responsibility of delivering them “to the extent that we feel there are trained personnel and capacity to actually put those to use in an effective way.”
Washington has so far given Ukraine 108 howitzers and four HMARS, which can fire missiles to hit targets up to 40 miles away. But Ukrainian officials say they need around 300 of the rocket-launching systems.
The Biden administration will continue to give Ukraine lethal aid “as fast as we can send it” for as its long they need, the newly dubbed National Security Council coordinator for strategic communication, retired Rear Admiral John Kirby told CNN last week.
World