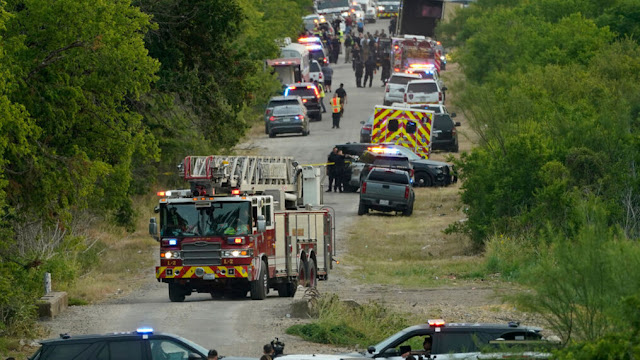 Police charged two undocumented Mexicans on Tuesday with firearm offenses after finding the pair were connected to the 51 migrants who died from heat exhaustion in the back of a tractor-trailer truck found in Texas.
Federal prosecutors charged Juan Francisco D’Luna-Bilbao and Juan Claudio D’Luna-Mendez separately as illegal aliens in possession of firearms, according to court documents filed Tuesday in the U.S. District Court in the Western District of Texas.
Prosecutors are requesting both D’Luna-Bilbao and D’Luna-Mendez be held without bond. They both face up to 10 years in prison and a $250,000 fine.
Forty-six migrants were found dead in the back of a sweltering hot 18-wheeler truck parked next to a set of train tracks on a major road near San Antonio, Texas, on Monday night. Another five later died at local hospitals and 11 more are receiving treatment.
San Antonio Mayor Ron Nirenberg called the incident “nothing short of a horrific human tragedy” during a press conference.
The U.S. Immigrations and Customs Enforcement Homeland Security Investigations team is handling the case for a federal investigation.
According to court documents, San Antonio officers tracked the Texas registration plate of the semi-truck to a residence in San Antonio on Monday night.
There, police observed D’Luna-Bilbao leaving the residence inside an F-250 truck and pulled him over. During questioning, police found a handgun inside the truck.
Around the same time, police saw D’Luna-Mendez leave the residence in another vehicle, prosecutors said in additional court documents. Officers obtained a search warrant for the residence and found several firearms, including a 9 mm handgun, a multi-caliber rifle and a 12-gauge shotgun.
Both suspects have Mexican citizenship and admitted they were undocumented during police questioning.
Texas