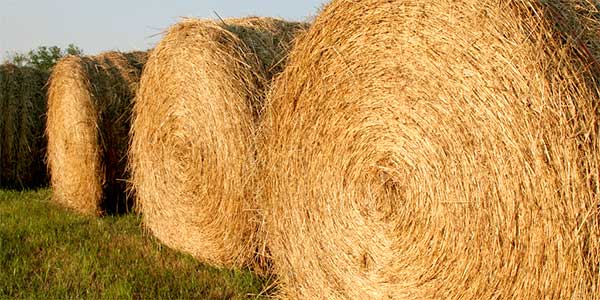 The 2022 Texas hay production outlook appears in doubt due to high fertilizer prices and widespread drought, said Texas A&M AgriLife Extension Service experts.
Joe Paschal, Ph.D., AgriLife Extension livestock specialist, Corpus Christi, and Vanessa Corriher-Olson, Ph.D., AgriLife Extension forage specialist, Overton, said dry weather, high temperatures and reduced inputs like fertilizer have inhibited warm-season grass production across much of Texas. Hay quantity and quality are down, while the cost to produce bales is up, and weather forecasts do not look favorable.
Pockets of the state have received decent moisture, they said, but high fertilizer prices have discouraged hay producers from making applications. As a result, hay baled was expected to be of lower quality.
Paschal said prices for supplemental feed like range cubes and hay have continued to increase. Range cubes reached $400 per ton, while round bales were starting to fetch $75-$80. For weeks, AgriLife Extension agents have reported $80-plus bales in extremely dry areas of the state.
Some cattle producers around the state have been culling their herds deeper to reduce stocking rates and “mouths to feed,” Paschal said. But many more face declining grazing, tightening hay supplies and below-average bale production this season.
“People are baling, but it looks like this hay season could be one cutting, maybe two,” he said. “There is hay being fed now, so the hay situation could be tough.”
Avoid overstocking as forage conditions decline
Paschal said hay production and grazing conditions were spotty and mirror scattered rainfall in south Central Texas from Del Rio to Kerrville and east of Corpus Christi back to the Rio Grande River. Some pockets have reported 4-7 inches, but much of that area had not received any rainfall since last fall.
Most of East Texas is experiencing abnormally dry to moderate drought conditions, according to the drought monitor map of Texas produced by the National Drought Mitigation Center at the University of Nebraska. Areas in south Central Texas were showing mostly severe and exceptional drought conditions, which translates into major to exceptional crop and pasture loss and widespread water shortages and restrictions.
Grasses and crop growth are stunted under abnormally dry conditions, and damages begin to show as moderate drought sets in, according to the center. Extremely high temperatures are exacerbating the moisture deficit for plants, including pasture grasses.
Corriher-Olson said weather outlooks suggest Texas will slip further into the drought. Weather systems during hurricane season could change that, but producers with grazing should be implementing contingency plans if they have not already.
“I really don’t have a feel for how many producers are adjusting their grazing management as a result of drought and high fertilizer prices,” she said. “It gets harder to avoid overstocking when forage production is limited. But it puts a lot of producers in a really tight spot when they don’t have the hay or grazing to try and maintain their herd.”
Plan for tight supplies, test hay
Both Corriher-Olson and Paschal expect hay supplies to be tight and low quality going into winter if conditions do not reverse soon.
Drought and fertilization – each of those factors alone can put a dent in hay production, Corriher-Olson said, but both at the same time can be disastrous for both quality and yields. High temperatures also increase Bermuda grass’s fiber content, making it less digestible for cattle.
Fertilizer prices have softened some, Corriher-Olson said, and producers could potentially fertilize ahead of a promising storm system that might provide moisture for a cutting. But cuttings are best at the beginning and end of the season when temperatures begin to decline.
One East Texas producer she talked to is forgoing fertilization this summer to invest input costs into cool-season forage production, she said.
Corriher-Olson said producers should be making decisions regarding stockpiled forages and hay supplies with an expectation of very high bale prices, especially for quality hay, just to cover the cost of fertilizer, pesticide and herbicide applications and diesel.
Paschal said producers should be planning for ways to stretch available nutrition – whether that is finding alternative feed like cotton seed, purchasing failed corn crops or using supplemental feeds with a limiter to reduce the number of trips to feed.
Hay production conditions are better in states east of Texas, he said, and bales are likely to be moved into Texas or cattle are expected to be moved to better pastures. He suggests cattle producers test bales for their nutritional value, whether purchased or produced. Tests can provide information that will better guide cattle supplementation, improving the digestibility and nutritional value of that hay.
Producers can reach out to AgriLife Extension agriculture agents in their county for assistance with hay testing, Paschal said.
“It’s going to be tough,” he said. “There is a lot of hay cows will eat when there is nothing else, but it doesn’t mean it is good. There are ways to stretch a cow’s nutritional needs, but the bottom line is getting the right amount of protein and energy in her.”
Farm and Ranch