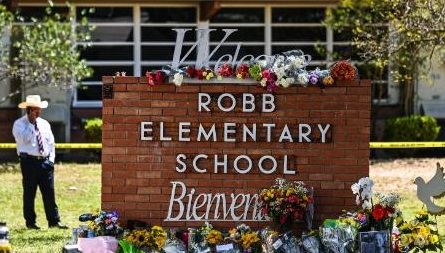 Texas districts must inspect every exterior door of each campus before the start of the next school year.
Districts must also conduct a summer safety audit as well as review emergency operations and active threat plans and ensure that all campus staff — including substitutes — are trained on safety protocols.
The Texas Education Agency issued new safety guidance on Thursday afternoon, just weeks after the deadly school shooting in Uvalde that killed 19 children and two adults.
Officials need to ensure that each exterior door at schools closes and locks, according to the guidance. Districts must also convene their safety and security committees in reviewing plans.
Earlier this month, Gov. Greg Abbott directed the agency to enforce weekly door inspections to ensure their security. The shooter in Uvalde gained access to Robb Elementary through an unlocked exterior door, although it’s not clear how the door was able to be opened.
Once the school year begins, local officials will have to conduct exterior door sweeps at campuses at least once a week, according to the new guidance.
The TEA is developing rules on building standards aimed at securing facilities. The agency will seek input from districts on schools not in compliance with the standards to help determine how much it would cost to remedy the issues. Data collected will be sent to state lawmakers to help craft funding requests.
Texas’ school facility footprint is immense, with more than 8,000 campuses and 672 million square feet, larger than the footprint in every state but California, according to the National Council on School Facilities. Building designs and ages vary greatly, as do security protocols.
School leaders say they are committed to securing their campuses but face considerable logistical challenges in locking down schools, particularly high schools that often resemble college campuses.
Districts often rely on bond money to make sweeping security changes because the state provides minimal financial support relative to the overall cost.
“We understand that the safety of students and staff is always the top priority of Texas public school systems,” Commissioner of Education Mike Morath and Texas School Safety Center director Kathy Martinez-Prather wrote in a joint letter posted Thursday. “While the requirements described herein may be new to a few, we know that most schools in Texas are already implementing these actions and more to keep our students and staff safe.
Earlier this week, Abbott and other state leaders announced a $105.5 million budget transfer to bolster school security and mental health initiatives. The money will go toward a number of items, including bulletproof shields, silent panic alert technology, safety audits and mental health telemedicine.
Texas