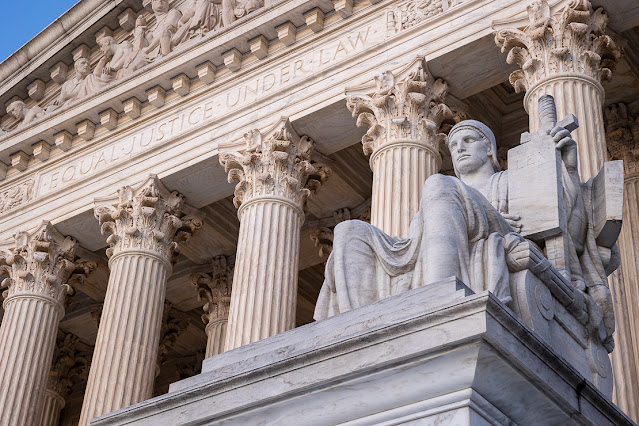 The Supreme Court on Thursday curbed the Environmental Protection Agency’s (EPA’s) ability to regulate climate change, setting limits on how the agency can deal with power plants.
In a 6-3 decision, the majority ruled that Congress did not authorize the EPA to induce a shift to cleaner energy sources using the approach that an Obama-era regulation sought to.
“Congress did not grant EPA…the authority to devise emissions caps based on the generation shifting approach the Agency took in the Clean Power Plan,” the majority wrote, referring to an Obama-era power plant regulation.
The ruling was split along ideological lines, with its conservative justices opting to restrict the EPA’s power while the liberal justices disagreed.
At issue in the case was language in the Clean Air Act that enables EPA to regulate power plants using a “best system of emissions reduction” and what specifically that system can entail.
The majority opinion, penned by Chief Justice John Roberts, determined that the Obama administration’s use of a system that involved moving away from carbon-intensive coal plants and toward natural gas and renewables did not qualify.
Roberts wrote that the plan, which involved regulating the power system as a whole instead of regulating individual plants, was an “unprecedented” view of the EPA’s authority that involved a “fundamental revision of the statute, changing it from [one sort of] scheme of . . . regulation” into an entirely different kind.
In Thursday’s ruling, the court took a regulatory tool off the table for the Biden administration, which is currently working on its own power plant regulations.
Legal experts recently told The Hill that preventing the EPA from using certain climate tools could result in regulations that allow more planet-warming emissions overall.
Justice Elena Kagan, writing a dissent for the three liberal justices on Thursday, said the majority was constraining the federal government’s ability to address carbon emissions during a time of crisis.
“The subject matter of the regulation here makes the Court’s intervention all the more troubling,” Kagan wrote. “Whatever else this Court may know about, it does not have a clue about how to address climate change. And let’s say the obvious: The stakes here are high. Yet the Court today prevents congressionally authorized agency action to curb power plants’ carbon dioxide emissions.
“The Court appoints itself—instead of Congress or the expert agency—the decision-maker on climate policy. I cannot think of many things more frightening.”
While the majority tailored its ruling to the challenge against the EPA’s authority, the decision could have implications for other administrative agencies, with the newly emboldened conservative wing indicating it would be skeptical of any broad interpretations of regulatory authority delegated by Congress.
In remarks celebrating the ruling, West Virginia Attorney General Patrick Morrisey (R) said his office viewed the case as pertaining to separation of powers, and indicated that it would seek to fight similar cases at different agencies.
“This is about maintaining the separation of powers, not climate change,” he said in a statement. “And we’re not done. My office will continue to fight for the rights of West Virginians when those in Washington try to go too far in asserting broad powers without the people’s support.”
The high court took up the case in response to separate petitions from a group of states led by West Virginia, the state of North Dakota and two coal companies.
Meanwhile, the EPA continues to work on setting its own power plant regulations.  Administrator Michael Regan previously said the agency would be “ready to go as soon as the Supreme Court rules.”
“We are reviewing the Supreme Court’s decision. EPA is committed to using the full scope of its existing authorities to protect public health and significantly reduce environmental pollution, which is in alignment with the growing clean energy economy,” a spokesperson for the agency said.
President Biden has pledged to make the power-sector free of carbon emissions by 2035.
The ruling is the latest sweeping conservative victory that the court has handed down as it wraps up its term. In the past week, it overturned the landmark Roe v. Wade decision that established a constitutional right to abortions, significantly expanded the Second Amendment in striking down a New York gun control law and affirmed a public high school football coach’s right to pray on the field after games.
On Thursday, the last day of court’s term, the justices also announced it would hear a case that could have major implications for how states conduct elections.
In their dissent, the liberal justices accused the majority of straying from their own principles in interpreting legislative text in order to deal a blow to environment regulators. In her dissent, Kagan mentioned a 2015 speech she gave in which she said, “We’re all textualists now.”
“It seems I was wrong,” Kagan wrote on Thursday. “The current Court is textualist only when being so suits it.”
National