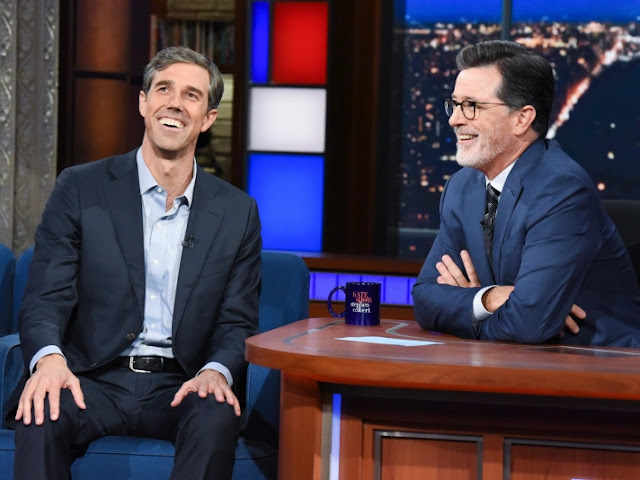 It’s not new that Stephen Colbert has a lot of Democratic politicians as guests on his late-night talk and comedy program. But it’s easy to miss just how frequently Colbert’s set features someone who’s in office, running for office, or otherwise best known for being in the world of politics, as opposed to television.
On Thursday, Colbert hosted Beto O’Rourke, who’s running for governor of Texas. On Friday, Colbert aired a rerun featuring Senator Raphael Warnock, who’s running for reelection in Georgia. Last night, Colbert hosted Representative Alexandria Ocasio-Cortez (D., N.Y.). Tonight, he hosts Representative Adam Kinzinger (R., Ill.). Friday, Colbert will welcome author Ibram X. Kendi.
Colbert still has actors, comedians, and other entertainment figures like Bryan Cranston, Karl Urban, and Heidi Klum as guests, but clearly anti-GOP politics, and softball interviews with Democratic officials and candidates, are a big part of the Colbert brand and the show’s identity.
It’s a free country, and Colbert and his staff are free to book the guests they like. But if you want to get a sense of why so much of 2022-era American culture feels angry, bitter, contemptuous, and in your face, maybe a factor is that late-night talk television — once the realm of less overtly partisan hosts like Johnny Carson, David Letterman, and Jay Leno — has effectively become indistinguishable from a DNC meeting.
There are a lot of reasons why Johnny Carson was averaging 6.5 million viewers when he retired, and why Colbert is averaging a bit less than 3 million these days. It’s a different media world, with a lot more competition from cable, streaming services, on-demand programming, DVRs, and the Internet. Network television plays a much less central role in popular culture than it did a generation ago. But there are also about 73 million more Americans now than there were when Carson retired; on paper, Colbert has a considerably bigger potential audience for what he’s offering.
It’s 11:30 p.m., your local news has finished telling you about your local crime and traffic accidents, tomorrow’s weather report, and the travails of the local sports team. You’re probably going to be in bed soon.
Are there people who get excited at that hour and say, “Honey, look! New Jersey senator Cory Booker is on tonight, and he’s going to talk about gun-control legislation!”
How many Americans hunger for yet another monologue with predictable jokes about how dumb Trump is, or how malevolent Mitch McConnell is, or one more friendly series of softballs with a Democratic official running for reelection? How many Democrats really hunger for more entertainment like that? Even if they do hunger for it, how different is what Colbert is offering from what Jimmy Kimmel does, or Samantha Bee, or Seth Meyers, or Trevor Noah, or . . .
Does Colbert even enjoy it anymore? How many times can you ask, “So, what is wrong with your Republican colleagues down there in Washington?” How excited is the studio audience to learn they get to sit through another recitation of canned talking points about how terrible it is that Republicans won’t get on board with the latest Democratic priority? How many times can you hear Nancy Pelosi say, “And that’s why we need all of our supporters to come out and vote this November!”
Maybe you can argue that certain political figures are charismatic or genuinely interesting — I think that’s often really debatable — but they’re certainly less glamorous or fun than most movie stars, pop stars, and other celebrities.
Were those Carson or Leno-era monologues safe and bland by today’s standards? Sure, but they effectively welcomed Americans of all political stripes.
For example, here’s Jay Leno, after the Supreme Court confirmation hearings of Clarence Thomas: “I thought was the strangest thing about watching the hearings, I think it’s the first time Americans have seen that many senators sitting at that long a table without a bartender on the other end. . . . The White House said that the testimony on TV at one point was so graphic that President Bush had to send Dan Quayle out of the room!”
Nope, it’s not edgy, and it’s not brilliant, thought-provoking humor. But does it need to be? There was something safe and reassuring about the gentle jabs of that era; the hosts certainly didn’t denounce roughly half the potential audience who may have voted for a Republican. Carson’s and Leno’s politics often amounted to “can you believe these idiots we have running our government?” Letterman grew more political as the years went by, but he built his reputation on silly, goofy segments like wearing a Velcro suit or dropping bowling balls off a five-story building onto a waterbed. (You’re going to click on those links, aren’t you? There’s some small part of your brain that is saying, “okay, I have to see what that looks like.”)
Carson and Leno and Letterman may not have thought well of conservatives or Republicans, but they didn’t think their job was to tell their audience which party to support. They just wanted viewers to have a good time, and most nights they delivered exactly what they promised.
When Colbert sits down for yet another interview with Adam Schiff (June 8) or Secretary of State Antony Blinken (May 18) or the prime minister of New Zealand (May 24) . . . is anybody having any fun?
Opinion