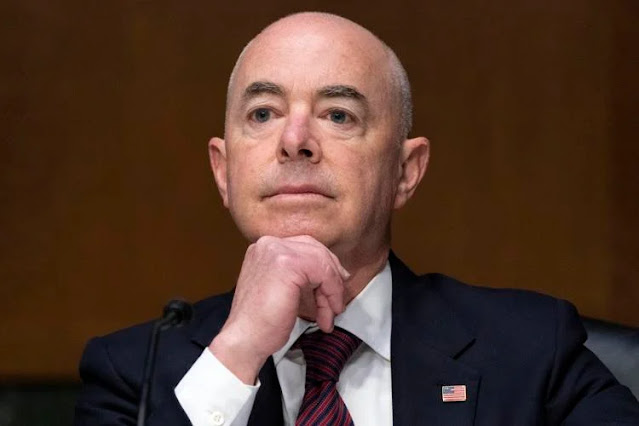 Several Republican senators are demanding a hearing saying they received documents from a Department of Homeland Security whistleblower about the agency’s new disinformation governance board that allegedly show DHS Secretary Alejandro Mayorkas misled a Senate committee when he testified about the board last month.
The lawmakers sent a letter this week to Sen. Gary Peters, D-Mich., chairman of the Senate Homeland Security and Governmental Affairs Committee asking for a hearing on the issue where Mayorkas could come back for questioning.
“We write to request you convene a hearing with Secretary of Homeland Security Alejandro Mayorkas as soon as possible to answer critical questions about apparently misleading testimony before the Committee on May 4 on the Department of Homeland Security Disinformation Governance Board (the Board),” the letter said. “We are deeply concerned that documents recently obtained by Senators Josh Hawley and Chuck Grassley contradict the Secretary’s testimony and public statements about the Board.”
This kerfuffle is the latest in a string of disputes around the board, not the least of which included Nina Jankowicz’ resignation from leading the board after controversial social media videos surfaced.
The Republican senators published the DHS documents online purporting to show documented evidence that Mayorkas misrepresented the purpose of the board.
“Responding to a question from a reporter ‘Will American citizens be monitored?’ Secretary Mayorkas responded unequivocally ‘No,’ adding that ‘We at the Department of Homeland Security don’t monitor American citizens,’” the letter said. “He went on to suggest the Board would be concentrating on foreign threats – ’addressing the threat of disinformation from foreign state adversaries [and] from the cartels.’ Yet talking points prepared by Ms. Jankowicz, the Board’s then–Executive Director appear to show that the Department does in fact monitor American citizens and that the Board’s work is concentrated on domestic threats.”
The documents also give evidence that the federal agency has been working on the disinformation board longer than Mayorkas let on in his testimony.
“At the May 4 hearing, Secretary Mayorkas testified that the Board ‘has not yet begun its work,’” the letter said. “Yet the documents indicate the Secretary had stood up the Board on February 24, 2022 – more than two months earlier. The Board’s charter, signed by the Secretary, required the Board meet ‘regularly’ and ‘no less than once per quarter.’ Another document dated only six days before Secretary Mayorkas appeared before the Committee provides preparatory materials for a meeting between Under Secretary for Policy Robert Silvers and Twitter. The document was prepared by Ms. Nina Jankowicz in her capacity as ‘Executive Director DHS Disinformation Governance Board,’ clearly evidencing that the Board had already begun its work.”
After the board was announced, critics quickly raised concerns about its implications for free speech and the Constitution.
“Any regime with an organized disinformation effort directed at its own people is one that is moving away from self-government and toward state control of the most basic aspects of liberty,” said Matthew Spalding, Constitutional expert and Dean of the Van Andel Graduate School of Government for Hillsdale College.
Now, the lawmakers are calling for a hearing, but whether that hearing will actually happen remains to be seen.
“The American public deserves transparency and honest answers to important questions about the true nature and purpose of the Disinformation Governance Board and it is clear that Secretary Mayorkas has not provided them – to the public or this Committee,” the letter said. “Therefore, we request you hold a hearing with Secretary Mayorkas and join us in insisting that all records related to the Board be provided to the Committee prior to the hearing.”
National