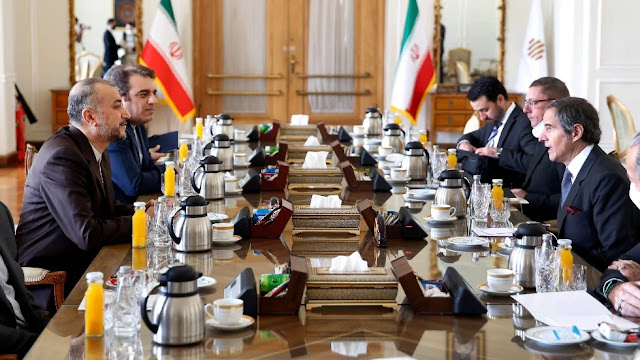 The latest negotiations between the U.S. and Iran ended in a deadlock, U.S. officials told Axios this afternoon.
Negotiators from the U.S. and Iran traveled to Doha, Qatar, this week to hold indirect discussions on a mutual return to the 2015 nuclear accord. According to Axios’s Barak Ravid, however, the two sides failed to make any progress.
“The Iranians have not demonstrated any sense of urgency, raised old issues that have been settled for months, and even raised new issues that are unrelated to the 2015 nuclear agreement,” a senior U.S. official told Ravid.
The talks had for months been held up by Iran’s insistence that the U.S. remove the Islamic Revolutionary Guard Corps from its list of foreign terrorist organizations. The IRGC’s FTO designation prohibits its members from entering the U.S., freezes IRGC assets, and allows the families of terror-attack victims to sue for damages in court.
It’s unclear what settled and unrelated issues the Iranian side brought up during the discussions. Iran was reported to have abandoned its demand on the FTO designation in favor of a narrower ask: that the U.S. lift its sanctions on the IRGC’s industrial-engineering arm.
Despite the apparently fruitless nature of the talks, the very fact that each side remains willing to continue the negotiations is significant. The Biden administration, searching for a foreign-policy victory, has given no indication that it intends to abandon the dialogue for a different approach to countering Iran’s nuclear program. Meanwhile, the Iranians have held firm on their intent to orchestrate the assassinations of top U.S. government officials.
World