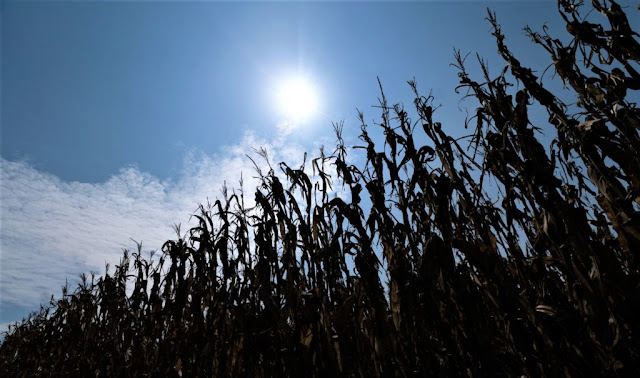 The high temperatures crops experienced over recent weeks across much of the state could translate into lower yields for producers, according to a Texas A&M AgriLife Research expert.
Lee Tarpley, Ph.D., AgriLife Research plant physiologist, Beaumont, said the recent heat wave arrived at a bad time for rice fields along the Gulf Coast. The triple-digit temperatures coupled with lingering drought conditions are also likely to negatively impact other crops during sensitive production stages.
All plants and vegetation experience heat stress when daytime and nighttime temperatures hit extreme highs like Texas has experienced over recent weeks. Heat and drought can stress plants, damage their cell membranes and disrupt metabolic efficiency during processes like photosynthesis and respiration, Tarpley said.
But the combination of high daytime and nighttime temperatures can economically damage commodity crops, especially during sensitive growth periods like flowering, he said.
“The period of high temperatures came so early that it will likely hit a lot of crops when they are most sensitive,” he said.
High temperatures influence plant function
For example, Tarpley said the cotton fields endured 100-plus degree days, above-normal nighttime temperatures and less than optimal soil moisture levels at bloom. The convergence of conditions is likely to translate into aborted squares and thus fewer pounds per acre or discounted gradings.
Rice and other grains experience similar yield loss under stressful conditions, but differently. Heat and moisture stress lead to reduced seed set and grain fill as heat leads to oxidative stress and can damage flower parts and developing reproductive structure.
High temperatures can also negatively impact the viability of pollen, which can influence how the ultimate crop sets and fills out, Tarpley said. Texas watermelon and cantaloupe producers reported pollination viability issues due to high temperatures earlier this season.
“Pollen development is a heat-sensitive period for rice and some other crops,” he said. “That stage precedes flowering by 10-14 days, and it was in the upper 90s during the day, which is rare for Beaumont. So, I expect there to be some impact on pollen development in rice fields.”
Some later-planted crops, like corn and cotton in the Texas Plains, could also be more susceptible to the recent heat wave, especially in drier areas and if hot, dry conditions persist, Tarpley said.
Texas A&M AgriLife Extension Service reports indicate dryland acres in drought-stricken parts of the state were suffering even before the recent heat wave. Many planted crop acres have not emerged and were replanted with other crops that were also showing signs of drought stress or have not emerged.
Water restrictions as drought deepens
Tarpley said he is concerned about water restrictions due to drought and their impact on irrigated crops, including rice, which needs shallow flooded fields. Restrictions could inhibit water pumping from canals. As fields dry down, nitrogen fertilizer becomes volatile in the heat and decreases its availability, further contributing to production losses related to the input cost and the ultimate reduction in yield potential.
“We’ve heard some reports of anticipated lower yields in rice, but nothing alarming so far,” he said. “The question for rice is keeping the fields flooded, which comes down to water availability.”
Water restrictions are also a concern for other parts of the state, including West and South Texas. Pecan and cotton producers in West Texas rely on water from the Elephant Butte Reservoir in New Mexico, which has provided limited water. Some crops in that area have received effluent water from El Paso.
The Rio Grande Valley, which produces a wide range of crops, relies on water released from Lake Amistad near Del Rio and Falcon Lake south of Laredo, but reservoir capacities have been declining. Lake Amistad sits just above 36% capacity, while Falcon Lake is just under 16% full.
Farm and Ranch