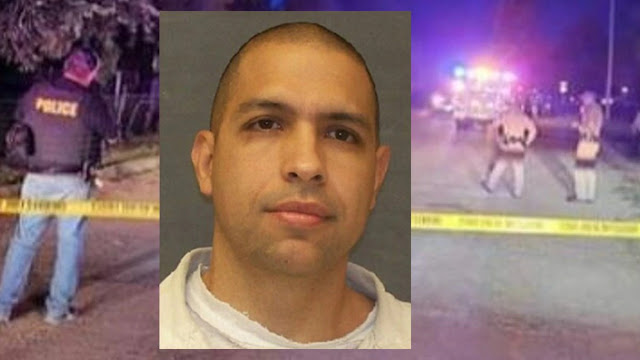 An escaped prisoner in Texas was fatally shot in a police shootout Thursday after allegedly killing a family of five and taking their vehicle.
Police officers in Atascosa County identified a vehicle stolen by fugitive Gonzalo Lopez and disabled it with spike strips, precipitating a shootout between the two parties.
Lopez was confirmed dead Thursday night, while no law enforcement officers were reported injured or dead.
The now-deceased prisoner, who served time for capital murder and attempted capital murder, escaped from a bus in May while being transported to medical appointments with fellow inmates.
Lopez attacked an officer on the bus and escaped into Leon County, between Dallas and Houston, after commandeering the vehicle.
The vehicle was wrecked near Centerville, Texas, and was found only after Lopez had made his escape.
Lopez traveled about 260 miles from the site of the vehicle coup to the site of his death.
The Texas Department of Criminal Justice offered the public a $50,000 reward for locating Lopez after publicizing a photo of the fugitive.
Lopez’s criminal record also included multiple aggravated assaults and other offenses such as possession of marijuana.
The capital murder perpetrated by Lopez occurred in 2005 alongside a count of aggravated kidnapping, following the attempted capital murder offense that Lopez committed in 2004.
Posted by High Plains Pundit on June 03, 2022
Email ThisBlogThis!Share to TwitterShare to FacebookShare to Pinterest
Labels: Texas