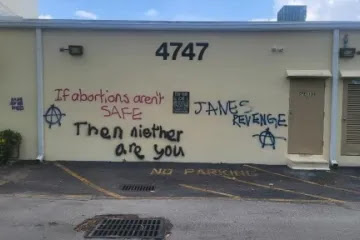 Dozens of attacks on churches, pregnancy crisis centers, and pro-life groups around the nation have drawn an FBI investigation and questions from lawmakers about whether the Biden administration is doing enough to stop them.
U.S. Sen. Chuck Grassley, R-Iowa, sent a letter to FBI Director Chris Wray this week calling for a briefing on the issue and urging Wray to ensure these “violent attacks are recognized by the FBI and are being properly investigated for what they are – cases of abortion-related violent extremism.
“There have been at least 40 violent attacks on crisis pregnancy centers, religious institutions, and other pro-life entities since the Dobbs leak and before the Court even issued its final opinion,” Grassley wrote. “This violence continues to cause injury, damage to property, and interruption of constitutionally protected worship services all across the nation. In fact, it substantially accelerated last weekend, after the opinion was issued.
“Current threats from abortion extremists are impending, serious, and dangerous,” he added.
Pro-life groups say they fear the attacks will escalate into worse violence. They argued the media has given little attention to the attacks, which took off after the controversial leak of an early draft of the Supreme Court opinion that overturned Roe v. Wade weeks before the official decision was released.
Last week, the U.S. Supreme Court ruled in Dobbs vs. Jackson Women’s Health that there is no constitutional right to an abortion and that the states have the right to decide their own respective abortion policies.
“I applaud Sen. Grassley for his efforts to protect pro-life pregnancy centers, churches, and other institutions,” said Eric Scheidler, executive director for the Pro-Life Action League. “It is critical that the FBI thoroughly investigate the rash of attacks on pro-life groups since the Dobbs draft was leaked, which have only intensified since the official ruling came down. The media have largely ignored these attacks, which don't fit their narrative, but if law enforcement doesn't step up, vandalism may escalate to physical violence and even homicide.”
Others called on the Biden administration to keep the groups safe.
“More than 40 pregnancy centers and churches have been attacked in the wake of the Supreme Court’s decision overturning Roe v. Wade,” said Peter Breen, vice president and senior counsel for the Thomas More Society. “But there’s been a media blackout on this violence, and pro-abortion politicians refuse to acknowledge it. We expect the Biden administration to do just as much to protect pro-life pregnancy resource centers as it would for abortion facilities.”
Recent reports show hackers have targeted states passing stricter anti-abortion measures. Other attacks have included arson, broken windows and graffiti.
The FBI said in a statement they are investigating the attacks.
“The FBI is investigating a series of attacks and threats targeting pregnancy resource centers and faith-based organizations across the country,” the FBI press office said in a statement. “The FBI takes all threats seriously and we continue to work closely with our law enforcement partners and will remain vigilant to protect our communities. We would like to remind members of the public that if they observe anything suspicious or have information about potential threats to report it to law enforcement immediately, call their local FBI field office, or submit a tip to tips.fbi.gov.”
National