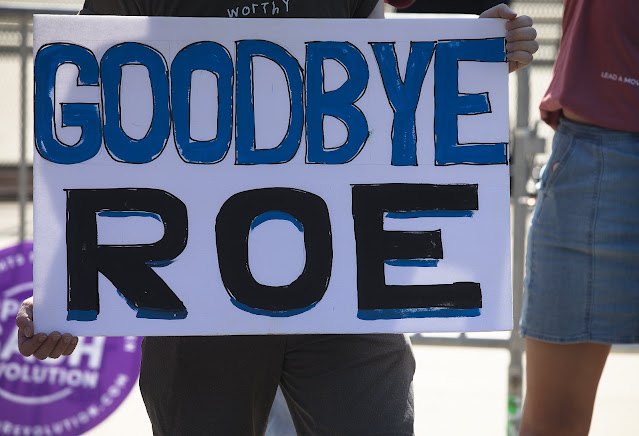 Saying this won’t be very popular, but I think what may surprise people in the coming weeks and months is how little will change surrounding abortion.
Blue states aren’t going to be restricting abortion at all, and in fact their governors say they intend to use taxpayer dollars to cover the costs for women traveling from other states to get an abortion. Fourteen states have “trigger laws” that have already banned or will soon ban all or most abortions — Alabama, Arkansas, Idaho, Kentucky, Louisiana, Mississippi, Missouri, Oklahoma, North Dakota, South Dakota, Utah, Tennessee, Texas, and Wyoming. (Wisconsin has a ban dating to the 19th century that its Democratic governor says will not be enforced.) In most of those states, abortion clinics were already few and far between. The abortion rate in places such as Alabama (6.3 per 1,000 women) and Arkansas (5.1) is significantly lower than the rate in places such as the District of Columbia (23.9) and New York (20.3).
Bans are going into effect in the places where the fewest abortions occur already — meaning the national abortion rate may not decline all that much in the coming years.
The U.S. Centers for Disease Control and Prevention reported that in 2019, 629,898 legal induced abortions occurred in 47 states, the District of Columbia, and New York City. The data do not include California, Maryland, and New Hampshire, whose state health agencies chose not to share their abortion numbers with the CDC. One analysis estimated that with Roe overturned, about 100,000 fewer abortions will occur in the U.S. each year.
You will see a lot of intense arguments about enacting bans or additional restrictions in “purple” or swing states, but if those states had legislative majorities and governors who intended to enact far-reaching restrictions on abortion, they likely would have passed those restrictions by now.
Abortion via pills will be exceptionally tough to regulate or eliminate. Telehealth, which accelerated during the pandemic, will allow those who want chemical abortions to consult doctors in other states. And we may well see abortion clinics set up shop near state lines in abortion-permitting states that border those where it’s banned.
The end of Roe may well launch a new era where America has somewhat fewer abortions, and those who seek to terminate their pregnancies travel to the nearest pro-abortion state or obtain abortion pills through the mail after a telemedicine appointment. This vision is neither The Handmaid’s Tale–style misogynist dystopia that the pro-choice crowd warns about, nor the child-welcoming, family-friendly utopia that pro-lifers wish to see.
There will be an effort to enact federal legislation superseding all those differing state laws, but it is difficult to see either pro-lifers or pro-choice forces attaining the necessary legislative majorities to do so while also controlling the White House. Assuming this year’s midterms shake out as expected, the U.S. will have divided government until at least January 20, 2025, and abortion legislation from one side would obviously face a filibuster from the other. To enact a uniform national policy on abortion, either pro-lifers or pro-choice lawmakers would need not merely legislative majorities in both houses and control of the presidency, but majorities who think imposing policy changes on other highly resistant states is a good idea.
If you think America’s current political and social tensions are bad, envision a pro-life Republican Congress attempting to ban abortion in New York and California, or a pro-choice Democratic Congress attempting to require legal taxpayer-funded abortion throughout the South and Midwest.
The fight to preserve unborn life is a cultural effort, as well as a legal one. The number of abortions in the U.S. declined significantly from the late 1970s and early 1980s to today, without that many legal restrictions in place. Year by year, more and more women facing unplanned or unexpected pregnancies have realized that they have options beyond terminating their child.
Opinion