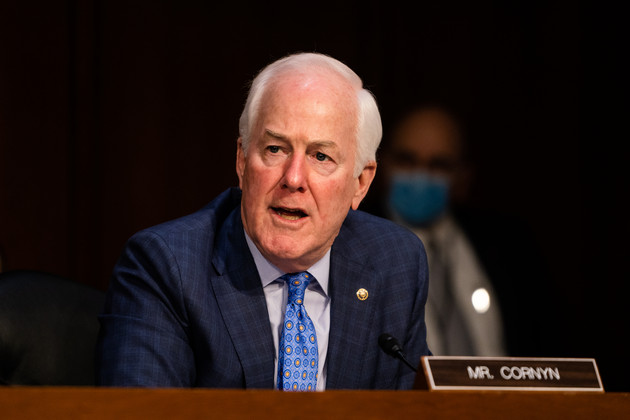 GOP senators, by and large, are holding off on taking public positions on the emerging Senate gun violence bill at the request of Sen. John Cornyn (Texas), the lead Republican negotiator.
Cornyn wants to keep his GOP colleagues on the sidelines for the moment so he has a chance to negotiate a bill before the effort gets ripped up by critics.
The senior Texas senator has the blessing of Senate Majority Leader Mitch McConnell (R-Ky.) who says wants to see a bipartisan deal on legislation to respond directly to the mass shooting in Uvalde.
Republicans in recent days have been quick to put support behind ideas centering on mental health treatment and bolstering school security. But they’ve largely avoided publicly commenting on proposals relating more directly to limiting access to firearms that have emerged in the talks.
Sen. Chuck Grassley (R-Iowa.) said Cornyn has asked him and others to keep their “powder dry” with the high stakes negotiations underway.
“He doesn’t want somebody saying, ‘I’m definitely for this’ or ‘I’m definitely against that,’ because it screws up their whole negotiation,” Grassley said.
Others have also insisted on staying quiet on proposals that have surfaced – ranging from incentivizing states to enact so-called red flag laws to expanding background checks – until negotiators have decided on a path forward.
Sen. Lisa Murkowski (R-Alaska) said on Thursday that she “wouldn’t be prepared to weigh in” on proposals until those involved in talks come up with “an agreed upon approach.”
Sen. Ted Cruz (R-Texas) also wouldn’t say if he opposed any of the floated measures, including the red flag proposal, saying instead that he “will examine any proposals that are put forward.”
The remarks come at a critical time in Congress and nationwide, with all eyes on Capitol Hill to see if senators can pull off a bipartisan deal on gun reform that even those heading discussions have characterized as close to impossible.
“It’ll be like we would be a miracle if we get a framework agreement, nevermind a final bill,” Sen. Chris Murphy (D-Conn.), who has been heading talks along with Cornyn, told reporters on Thursday. “But miracles sometimes happen.”
Many Senate Republicans were resistant to Democratic-led calls for gun reform last month, following a racist shooting at a store in a predominantly Black neighborhood in Buffalo, N.Y., that killed 10 people.
But more have signaled an openness to bipartisan talks following another massacre on May 24 at an elementary school in Uvalde, Texas, in which 19 children and two teachers were fatally shot.
The shift in the party comes as gun reform has dominated public interest in the weeks since, putting pressure on Congress to act. And at the same time, Democrats also seem prepared to accept a narrower deal on gun legislation in order to find compromise in a 50-50 split Senate, where legislation needs 60 votes to overcome a filibuster.
“Obviously, I would prefer to go much farther than Senator Cornyn and Republicans would. But I’m not going to let perfect be the enemy of the good,” Murphy said earlier this week. “I want to find a compromise.”
As negotiators try to reach an agreement, GOP leaders heading up talks have been working to lock down parameters for a framework on a gun deal that can win support from Republicans.
GOP members also say Cornyn gave a broad overview of negotiations during the party’s lunch earlier this week. And while some insist members are receptive to ideas, they say they need to see more.
“It’s clear to me from our lunch today that they’ve still got a long way to go,” Sen. John Kennedy (R-La.) said on Tuesday.
At the same time, Grassley said Republicans involved in talks have been trying to gauge just what legislation they could vote for.
“Is there anything that’s absolutely this way or that way? Or what could I vote for? What I couldn’t vote for?” recalled Grassley, who said he has “avoided making a determination” on proposals while the sensitive talks continue.
Sen. Pat Toomey (R-Pa.), who has been involved in bipartisan talks, says it’s up to individual members “to decide what they want to do.”
“But, as a general matter, if you think there’s any chance that you might possibly support something, then it may make sense to wait and see what it looks like before you characterize it,” Toomey added.
Democrats initially set sights on reaching an agreement on gun legislation this week, and while negotiators didn’t say they were at an agreement on Thursday, they say they’re close to nailing one down.
“I think that we’re pretty close on the broad framework,” Sen. Thom Tillis (R-N.C.), one of the negotiators, said on Thursday afternoon. “There’s still a lot of drafting, but we’re making good progress.”
Cornyn said this week he would like to see legislation moved “in the next couple of weeks.” But he’s said “nobody knows exactly what we’re going to do,” including him.
“We’ve got some foundational ideas. But we’re going to the long and arduous process of trying to build that out and give greater definition to it and then try to get the votes to pass it,” Cornyn said.
Posted by High Plains Pundit on June 10, 2022
Email ThisBlogThis!Share to TwitterShare to FacebookShare to Pinterest
Labels: National