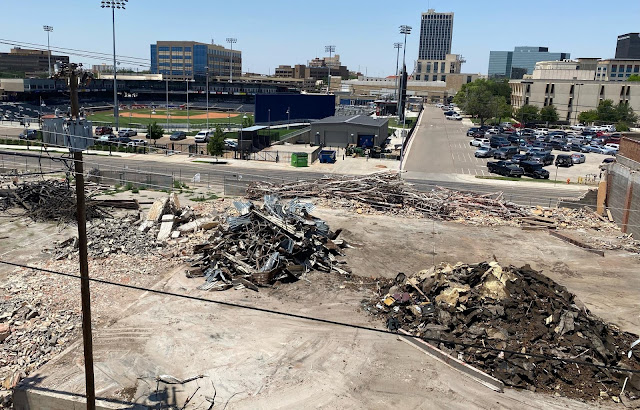 There will be a new life – of sorts – for the three city-owned buildings being removed to make way for a new city hall serving the Amarillo community.
“Recycling was always part of the plan for the new city hall project,” said City of Amarillo (COA) Director of Facilities Jerry Danforth. “The city is recycling as much as possible. This is not only the best policy as far as the environment, but it is the most effective policy from a monetary and budgetary perspective. Recycling works in many ways.”
Three city-owned buildings (former warehouses constructed 60-100 years ago) were recently demolished as part of the new city hall project. The buildings were adjacent to the Amarillo Hardware building, another city-owned building which will be renovated as a new city hall, replacing the 55-year-old current city hall facility. The three buildings removed as part of the project will live on – thanks to recycling.
“I would say 80-85 percent of the materials used in the construction of the demolished buildings – the steel, concrete and bricks – will be used in recycling,” said Juan Bueno, foreman/operater for Lloyd D. Nabors Demolition.
Once this part of the project is complete, it is estimated only 10 truckloads of materials from this demolition project will not be eligible for recycling. For perspective, at least 100 truckloads of concrete will be recyclable – and this is not counting recyclable brick and steel. Twenty truckloads of recyclable brick were removed from the site in one day.
“The recyclable material from these three buildings can be used for future construction projects,” Danforth said. “The more you can recycle, the better.”
Local