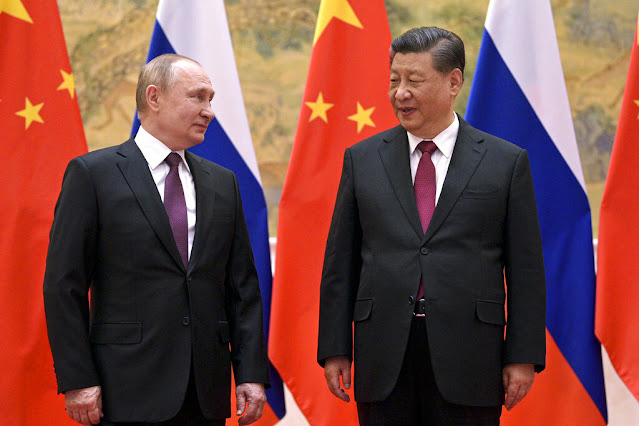 The Commerce Department today said that several companies in China are supplying Russia’s military, as it announced as new round of blacklist restrictions for foreign firms aiding Moscow’s war against Ukraine.
“These entities have previously supplied items to Russian entities of concern before February 24, 2022 and continue to contract to supply Russian entity listed and sanctioned parties after Russia’s further invasion of Ukraine,” stated an official Commerce Department notice posted to the Federal Register.
Commerce also blacklisted several Chinese companies and Chinese government research institutes for their work on naval-technology and supplying Iran with U.S. tech in a way that harms America’s national security.
The Chinese firms listed in the notice as continuing to work with Russia’s military industrial base include Connec Electronic Ltd., King Pai Technology Co., Ltd., Sinno Electronics Co., Ltd., Winninc Electronic, and World Jetta (H.K.) Logistics Limited.
The six companies identified to be supporting the Russian war effort are also based in Lithuania, Russia, the U.K., Uzbekistan, and Vietnam. They are allegedly flouting previous U.S.-government efforts to strangle Moscow’s defense complex.
After the invasion began earlier this year, Washington enacted stringent export restrictions targeting Russian firms in tandem with U.S. allies around the world, a noteworthy multilateral effort that even included Japan and Singapore.
In a statement today, Commerce’s top export-control official, Alan Estevez, celebrated the “sweeping export controls” that the U.S. is using to counter Russian aggression.
“We worked hard with our allies and partners to structure our export controls for maximum impact on Russia’s strategic sectors,” said Thea Rozman Kendler, the assistant secretary of commerce for export administration, in the same statement. “Given the breadth and cooperation of our multilateral coalition, we are well positioned not only to impose restrictions but also to track and cut off private firms that may seek to support Russia.”
In addition, two previously blacklisted Chinese firms continued to support the Russian military after Washington took action against Russian entities after the invasion began, according to the Commerce Department announcement.
Those firms are the China Electronics Technology Group Corporation 13th Research Institute and one of its subsidiaries, the Micro Electronic Technology in China. Commerce rapped the two companies for “continuing to contract to supply Russian parties after Russia’s invasion of Ukraine, notwithstanding the collective restrictions put in place by the United States and 37 of our coalition partners.” They were initially blacklisted in 2018 for illicitly procuring technologies for the Chinese military in a way that harmed U.S. national security.
The Commerce Department stopped short of blaming the Chinese government for the sanctions-evasion activity it identified today. Commerce secretary Gina Raimondo previously said that there doesn’t appear to be any “systemic efforts by China to go around our export controls.” The Biden administration has publicly and privately warned Beijing against supporting the Russian war, with White House officials even leaking to the press about an effort to present China’s ambassador in Washington with information about Russian troop movements ahead of the invasion.
While Beijing has not expressed outright support for the invasion, it has used its propaganda networks to back Moscow’s narrative. Meanwhile, top Chinese and Russian officials have moved to solidify the “no-limits” partnership they declared in early February. General secretary Xi Jinping and Vladimir Putin held a call this month, marking the construction of a new bridge between their two countries, during which they reiterated their support for the burgeoning geopolitical alignment.
National-security adviser Jake Sullivan said last month that the U.S. has no indications that Beijing has provided Russia with military equipment. A Finnish think tank, the Centre for Research on Energy and Clean Air, estimated on June 12 that Chinese imports of Russian oil since the outset of the conflict have amounted to $13 billion, making China the biggest consumer of the country’s oil exports. Previously, it was Germany. “While Germany cut back on purchases since the start of the war, China’s oil and gas imports from Russia rose in February and remained at a roughly constant level since,” the U.S.-China Economic and Security Review Commission noted.
World