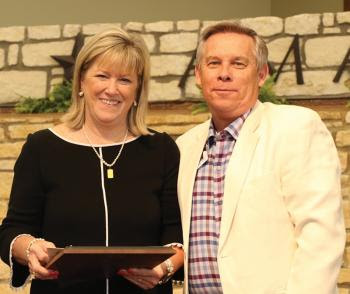 The recipient of the Bob Ashworth Award for Outstanding Service for 2022, Amarillo ISD’s highest employee honor, is Denise Blanchard. The award was presented to Blanchard at the District’s annual Service Recognition Banquet on May 9.
The nomination submitted on Blanchard’s behalf credits her with elevating AISD’s presence in the community as Program Director for Community Partnerships, a role she has held for 22 years. Blanchard is responsible for special events, volunteers and parent and community involvement in schools. Currently, more than 300 businesses and organizations and more than 2,500 community members, parents and students volunteer in our schools under Blanchard’s coordination. Prior to the community partnerships role, Blanchard taught home economics.
The Bob Ashworth Award is given annually to an employee with an outstanding career of service to students and staff. This award is named after Ashworth, who served as superintendent of AISD from 1958 to 1978. Along with a plaque and a monetary award, Blanchard’s portrait will hang outside the boardroom of the Rod Schroder Education Support Center.
Retiring employees were also honored at the banquet. AISD is the city’s largest employer with more than 5,000 employees supporting the District’s 32,000 students.
Posted by High Plains Pundit on June 02, 2022
Tags: Regional