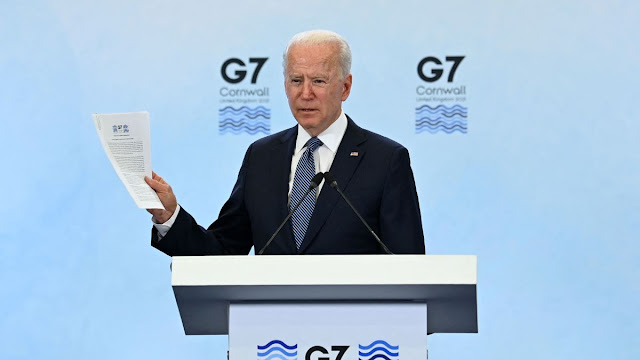 President Biden marked the relaunch of the massive international infrastructure partnership that was initially dubbed “Build Back Better World” at the G-7 Summit.
But an office to coordinate the initiative, which is supposed to mobilize hundreds of billions of dollars from developed countries over the next several years, has been placed on hold by congressional Republicans. They are concerned that what the administration sold as an initiative to counter Chinese influence is in reality a vaguely defined effort to direct U.S. government funds toward projects ranging from solar panels to gender-equity initiatives.
This weekend, the president and the White House provided more details about what this program, which is now called the Partnership for Global Infrastructure and Investment (PGII), will entail. The new info is unlikely to assuage GOP worries that PGII merely replicates what other agencies already do and that it exhibits a remarkable lack of focus on the competition with China.
For decades, leftists, with the media and academia on their side, were accustomed to triumphing in the culture wars.
During his remarks at the G-7 Summit in Germany on Sunday, Biden explained two key benchmarks: that the U.S. would mobilize $200 billion in public and private investment through 2027, and that the G-7 would do so collectively in the same time frame.
After the initial launch of the initiative with the Build Back Better branding last summer, the administration got to work on signing agreements for various projects.
Those initial projects, the president said, have included a vaccine-manufacturing site in Senegal (in tandem with the G-7 and the World Bank), an effort to direct $335 million in private funds for investment in “secure network technology” across the developing world, a U.S.-supported bid by a private company to build a $600 million undersea communications cable connecting Southeast Asia with Europe, a proposed U.S. investment of $50 million to the World Bank’s child-care program, a $2 billion private investment in solar panels in Angola, and a U.S. firm’s construction of a nuclear plant in Romania.
In addition to the flagship projects Biden cited, the White House said that government agencies have inked agreements for dozens of other programs over the past year.
The PGII launch is likely to reinforce conservative criticism of the initiative, considering the president made no mention of China’s efforts to extend its influence through its own infrastructure projects. The new details are also likely to raise additional questions as to why the administration needs a new coordinating office in the State Department to replicate the work that the National Security Council has apparently already performed this past year.
The Development Finance Corporation’s role in certain PGII projects might also be a target of criticism. Launched during the Trump administration as a critical tool of U.S. economic statecraft, with which Washington began its work to counter Beijing’s Belt and Road Initiative and to shore up the negotiations that ultimately yielded the Abraham Accords, the DFC has taken a different turn in recent months.
Pointing to its apparent focus on promoting projects on climate resiliency and gender equity, Senator Marco Rubio, in a letter last month, accused its leadership of channeling U.S. government funds “towards projects that satisfy only a narrow subsection of the progressive elite.” Worse, Senator Jim Risch warned last November that the DFC had funded projects with Chinese solar panels — meaning that the U.S. government might be funding projects made possible by forced labor in China.
Previewing the launch of PGII earlier this month, national-security adviser Jake Sullivan said that it would be a legacy-defining initiative for the president. But from the awkward rebrand to its apparent lack of focus, there’s currently good reason to question the extent to which it will even get off the ground.
World