Biden announces plans to bolster US force presence in Europe 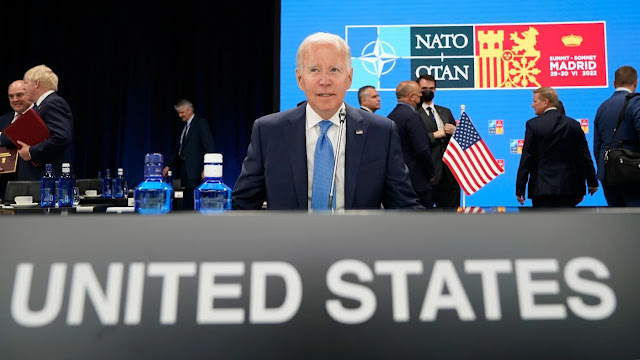 President Biden on Wednesday announced plans to bolster U.S. forces in Europe amid a persistent threat from Russia, saying the moves would help the North Atlantic Treaty Organization (NATO) fend off threats “from all directions, across every domain.”
Biden vowed to increase the number of troops stationed in Europe on the second day of a NATO summit in Madrid during a meeting with NATO Secretary General Jens Stoltenberg.
Specifically, the president announced plans to permanently headquarter U.S. Army V Corps in Poland, add a rotational brigade in Europe stationed in Romania and increase rotational deployments to the Baltic states — moves that will bolster forces on NATO’s easter flank.
Biden also said that the U.S. would send two more F-35 squadrons to the United Kingdom and add air defense and other capabilities in Germany and Italy. The president also highlighted plans to send two additional Navy destroyers to Spain, an announcement he made the day prior.
“We’re sending an unmistakable message, in my view,” Biden said, “that NATO is strong and united and the steps we’re taking during this summit are going to further augment our collective strength.”
“Together with our allies, we are going to make sure that NATO is ready to meet threats from all directions, across every domain,” Biden continued.
He also commended the progress toward adding Finland and Sweden as members of the alliance, saying: “NATO is more needed now than it ever has been.”
Stoltenberg said the new U.S. force posture commitments were demonstrative of Biden’s leadership.
The alliance is seeking to project unity and strength at the summit in Madrid as Russian President Vladimir Putin continues to press forward with a bloody military campaign in Ukraine.
Stoltenberg said during the meeting with Biden that Putin’s attack on Ukraine had failed to weaken NATO, citing the bids by the two Nordic countries to join the alliance.
“He is getting the opposite of what he wants. He wants less NATO. President Putin is getting more NATO,” Stoltenberg said.
The war in Ukraine is the dominant topic of the summit, and other alliance members are also expected to make new force posture commitments. Ukrainian President Volodymyr Zelensky is expected to address leaders virtually during the meeting.
The alliance will also endorse a new strategic concept that explicitly mentions China, a recognition by the members of the growing threat posed by Beijing.
The summit saw a major development on its first day when Turkey dropped its objections to Finland and Sweden’s membership bids, paving the way for both countries to join the alliance.
The three countries signed a memorandum pledging to deepen counterterrorism cooperation, in a nod to Ankara’s stated concerns about Finland and Sweden not doing enough to crack down on the Kurdistan Workers’ Party (PKK), a group identified as a terrorist organization by Turkey, the U.S. and European countries.
President Biden is scheduled to meet with Turkish President Recep Tayyip Erdoğan later Wednesday on the sidelines of the summit.
World