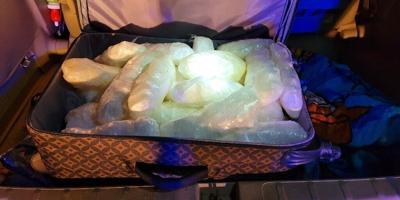 By Bethany Blankley
With thousands of people a day pouring into Eagle Pass, Texas, Gov. Greg Abbott said at a news conference Wednesday in the small border town that the state's border security operations are expanding,
He made the announcement after sheriff’s deputies in a county further north apprehended human smugglers and dropped them off at the port of entry in Eagle Pass, effectively deporting them.
Abbott said he is expanding Texas Department of Public Safety operations within Operation Lone Star to include new strike teams of 20 troopers each. They’ve already begun targeting semi-trucks and establishing new vehicle checkpoints in order to detect and deter smuggling operations, the governor said.
The Texas Military Department also is deploying more razor wire along the Rio Grande River, adding more miles of fencing and barriers on state and local property, and deploying additional boat teams, he said. Texas is continuing to do the federal government’s job in response to a crisis the president created, Abbott argues.
"The Lone Star State will not sit idly by as the federal government chooses to ignore the historic number of illegal crossings, human smuggling, and drug trafficking of deadly fentanyl from Mexico into the United States,” he said. “Our government has no greater responsibility than to provide public safety to its citizens. Until President Biden decides to uphold immigration laws passed by Congress, the state of Texas will continue utilizing every tool available to secure the border and keep Texans – and Americans – safe."
The thousands of people daily entering the Eagle Pass region have crossed the Rio Grande River from Piedras Negras in Coahuila, Mexico. The constant flow of people, drugs and smuggling through their communities, some residents argue, is evidence that the memorandum of understanding Abbott signed with the governor of Coahuila hasn’t stopped illegal crossing or crime.
On April 14, Gov. Abbott signed memorandas of understanding with Coahuila Gov. Miguel Ángel Riquelme Solís and Chihuahua Gov. María Eugenia Campos Galván in Austin. He’s signed four agreements in total. Since then, illegal entry into Texas from these governors’ states has only increased, not decreased, according to federal data.
On Wednesday morning, farther north of Eagle Pass in Kinney County, Sheriff Brad Coe's deputies engaged in a vehicle pursuit of human smugglers, which ended with the vehicle rolling over. Deputies, due to a range of factors, transported four illegal immigrants to the Eagle Pass Port of Entry and dropped them off in the middle of the international bridge, effectively deporting them. Federal officers staffing the bridge applauded the deputies, retired Border Patrol agent Frank Lopez Jr., who’s running for Congress in the district covering this part of the border, told The Center Square.
Coe couldn’t be reached for comment.
“Law enforcement officers have sworn an oath to uphold the constitution,” Lopez said, and what the Biden administration is doing is “ignoring, disregarding, and violating it.”
“I’m surprised that we haven’t had more of a righteous disregard for unlawful and unconstitutional orders within the Border Patrol,” he added of those working in his former agency of 30-plus years. “What Border Patrol agents are being ordered to do isn’t what they signed up for,” he said, referring to processing and releasing illegal immigrants into the U.S. instead of deporting them in accordance with federal law.
“Sheriff Coe will always place the safety of Kinney County residents above all else,” Kinney County Attorney Brent Smith told The Center Square. “If that means transporting illegal aliens to the border, then so be it. The safety of Texans should be placed before the comfort of others illegally within our country.”
Smith helped prosecute the first convicted illegal immigrant apprehended through Operation Lone Star. Kinney County leads in the number of OLS arrests for criminal trespassing, human smuggling and other crimes committed out of all counties participating in Texas’ border security operation.
Kinney County was the first to declare a disaster declaration last April in response to the impact illegal immigration has had on its residents. Other counties followed suit, also issuing disaster declarations. One month later, Abbott declared a disaster declaration for multiple counties in response.
Abbott’s and local sheriffs’ efforts continue after a record number of people have been apprehended entering the U.S. illegally at the southwestern border and a record number are estimated to have evaded capture and are living somewhere in the U.S. illegally.
Posted by High Plains Pundit on June 30, 2022
Tags: Texas