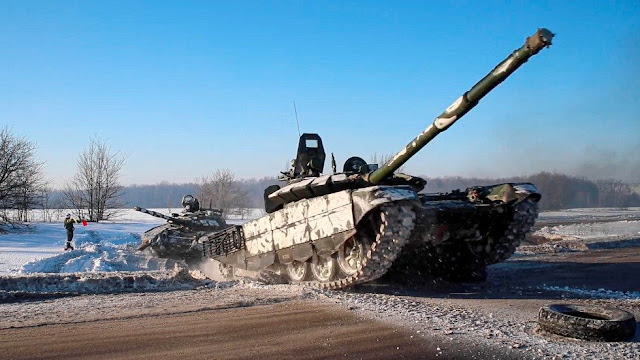 The U.S. military estimates that Russia has lost nearly 1,000 tanks and “a not insignificant amount” of personnel in its now three-month long attack on Ukraine, a senior U.S. defense official said Thursday.
“We believe they’ve lost or rendered inoperable almost 1,000 of their tanks in this fight,” the official told reporters, but noted that “they still have a lot left available to them.”
The official also said the Kremlin has “suffered a not insignificant amount of attrition” among its troops.
Russian forces have also lost “well over 350 artillery pieces,” almost three dozen fighter bomber fixed wing aircraft and more than 50 helicopters.
Pentagon press secretary John Kirby later said that the Russians “continue to take casualties every single day in this war,” which began on Feb. 24.
“We know that they have lost not only soldiers, but they’ve lost a lot of equipment and weapons. They’re expending a significant number of their cruise missile and precision guided munitions inventory in this war. So we know that they are looking across the board at ways to try to resupply and replenish themselves,” Kirby told reporters.
The U.S. assessment comes as Ukrainian defense officials earlier on Thursday claimed nearly 30,000 Russian troops had been killed in the invasion.
The Pentagon has declined to publicly estimate the casualty figures, instead only noting that Russia still has 110 battalion tactical groups in Ukraine – more than 80 percent of its fighting units.
“They have invested an awful lot of their hardware and their personnel in this fight, and they have suffered losses,” the official said. “We still believe, though, with all that . . . that they still have a significant amount of the majority of their capability left to them.”
They explained that the Russians still have an upper hand in the fight in terms of the sheer numbers of assets they can apply – in terms of both people and weapons.
Still, Kremlin troops haven’t made much progress in trying to cut off the Donbas region in eastern Ukrainian, where its forces have amassed for the goal.
The Russian forces are attempting to encircle villages in the region and “make it very difficult for the Ukrainians to resupply themselves,” but have only made “incremental gains,” the official said.
Posted by High Plains Pundit on May 26, 2022
Email ThisBlogThis!Share to TwitterShare to FacebookShare to Pinterest
Labels: World