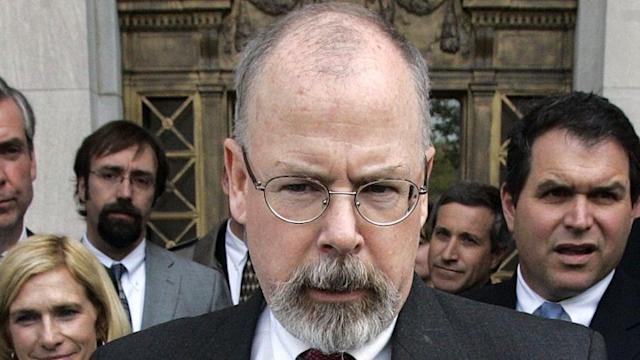 Michael Sussmann, a lawyer who represented Hillary Clinton’s presidential campaign and the Democratic Party, was acquitted by a federal jury on Tuesday of a single count of lying to the FBI, The Associated Press reported.
The decision is a major blow to special counsel John Durham’s investigation into the origins of the bureau’s scrutiny into former President Trump’s 2016 campaign.
The case had been the biggest of Durham’s investigation, which has lasted three years and has done little to support Trump’s claims of a politically motivated witch hunt into alleged ties between him and Russia.
Durham’s case against the former Perkins Coie partner had been controversial from the beginning. The special counsel’s office alleged Sussmann arranged a meeting in October 2016 with James Baker, then the FBI’s general counsel, to provide data purporting to show suspicious internet traffic between Trump and Alfa Bank, a Russian financial institution.
Prosecutors accused Sussmann of lying when he told Baker that he was not attending the meeting on behalf of any of his clients, which at the time included Clinton’s campaign and a cybersecurity researcher named Rodney Joffe, who had assembled the Alfa Bank data.
But Sussmann’s lawyers argued at trial that the case was thin, lacking any third-party witnesses to the one-on-one meeting or any contemporaneous notes. The defense team argued their client had not lied, that he was turning over the information to aid the FBI, and that even if the FBI did not know the source of the data, it had little material effect on their subsequent investigation.
The FBI ultimately concluded that it could not establish a link between Trump and Alfa Bank.
“While we are disappointed in the outcome, we respect the jury’s decision and thank them for their service. I also want to recognize and thank the investigators and the prosecution team for their dedicated efforts in seeking truth and justice in this case,” Durham said in a statement.
Sussmann on Tuesday maintained that he had been truthful with the FBI and said he was thankful for the jury’s unanimous verdict.
“I am grateful to the members of the jury for their careful and thoughtful service. Despite being falsely accused, I am relieved that justice ultimately prevailed in this case,” he said in a statement. “As you can imagine, this has been a difficult year for my family and me. But right now, we are grateful for the love and support of so many during this ordeal, and I’m looking forward to getting back to the work that I love.”
His defense lawyers, Michael Bosworth and Sean Berkowitz, added in a joint statement that the verdict shows Sussmann should never have been prosecuted.
“We have always known that Michael Sussmann is innocent and we are grateful that the members of the jury have now come to the same conclusion,” Bosworth and Berkowitz said. “But Michael Sussmann should never have been charged in the first place. This is a case of extraordinary prosecutorial overreach. And we believe that today’s verdict sends an unmistakable message to anyone who cares to listen: politics is no substitute for evidence, and politics has no place in our system of justice.”
Durham, who served as the U.S. attorney for Connecticut during the Trump administration, was tapped by former Attorney General William Barr in early 2019 to probe the origins of the FBI’s investigation into the Trump campaign. In late 2020, Barr elevated him to special counsel status, allowing the investigation to continue after President Biden took office.
The probe has lasted longer than Robert Mueller’s own special counsel investigation, and Durham has charged three individuals so far, including Sussmann. A former FBI attorney pleaded guilty in 2020 to a single felony count for altering an email as the bureau was seeking a warrant for a wiretap of Carter Page, who advised the Trump campaign on foreign policy for a period during 2016.
And a trial is set to begin in October for Igor Danchenko, an analyst whom Durham alleges lied to the FBI about his work on the controversial Steele Dossier.
But Durham has provided little evidence to support Trump’s claims of a wide-ranging political conspiracy against him, and Tuesday’s verdict further undermines the former president’s case.
Still, Trump has remained undeterred in leveling accusations against his political opponents in court and in the media. In March, he filed a lawsuit against Clinton and dozens of others tied to the Democratic Party or federal law enforcement, alleging a massive conspiracy to undermine his political fortunes with a smear campaign trying to tie him to the Kremlin.
A federal judge in West Palm Beach, Fla., will hold a hearing on Thursday over whether to dismiss the case.
Posted by High Plains Pundit on May 31, 2022
Tags: National