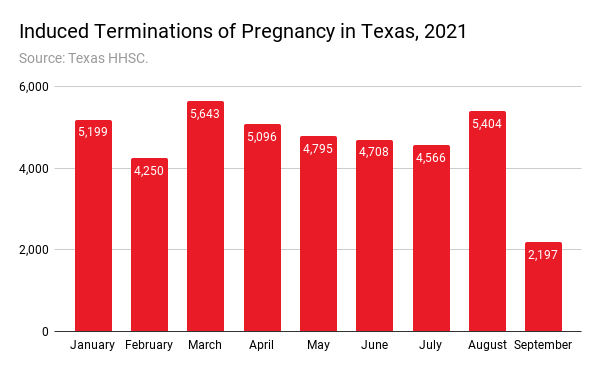 Abortions in Texas dropped nearly 60 percent in the first month the most restrictive abortion law in the nation was in effect, according to state data.
The number of abortions performed in the state fell from 5,404 in August to just ​​2,197 in September. The Texas heartbeat law, S.B. 8, bans all abortions after fetal cardiac activity is detected, typically around six weeks of pregnancy, before most women know they are pregnant.
The figures from the Texas Health Department, which were released earlier this month, show the dramatic impact of the law just one month after it took effect. Data has not been released for the rest of 2021 beyond September.
The law authorizes citizens to file private lawsuits against those who perform, aid or abet an abortion after six weeks. Successful suits under S.B. 8, which contains no exceptions for rape or incest, fetch at least $10,000.
So far, no lawsuits have been filed, but several clinics ceased providing abortions.
The ban conflicts with Roe v. Wade, the landmark 1973 ruling that recognized a constitutional right to abortion before a fetus is viable, typically around 24 weeks of pregnancy. But the law was deliberately written to circumvent the ruling. So despite challenges, the U.S. Supreme Court has declined to block the law.
The high court remanded the case to the conservative 5th Circuit, which then sent the lawsuit to the Texas Supreme Court, which is controlled entirely by Republicans.
Abortions in 2021 peaked highest in March at just over 5,600, when the law was first introduced, and again in August, just before it took effect on September 1. Notably, only two abortions in September occurred after eight weeks.
The data consistently showed slightly more medication abortions performed throughout 2021, but in September the gap widened dramatically, as there were more than twice as many nonsurgical abortions.
In contrast to a surgical abortion, which takes place in a clinic, a medication abortion involves two pills, taken 48 hours apart, to end a pregnancy.
But Texas is also cracking down on abortion drugs. A law passed in December bans prescribing abortion-inducing medication to anyone more than seven weeks pregnant, and made it a felony to prescribe those medications through the mail or telehealth.
Posted by High Plains Pundit on February 10, 2022

Email ThisBlogThis!Share to TwitterShare to FacebookShare to Pinterest
Tags: Texas