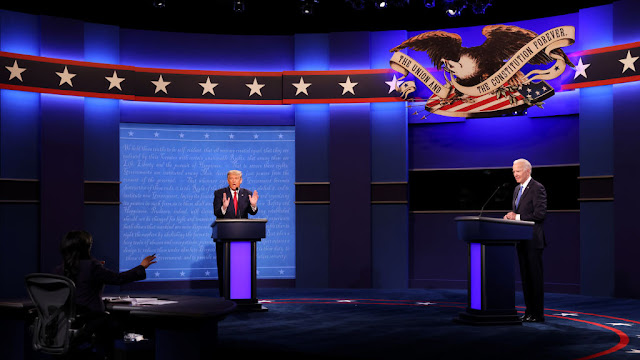 The Republican National Committee (RNC) alerted the Commission on Presidential Debates (CPD) on Thursday that it plans to require GOP presidential nominees not to attend debates run by the commission going forward.
"The RNC will initiate the process of amending the Rules of the Republican Party at our upcoming Winter Meeting to prohibit future Republican nominees from participating in CPD-sponsored debates," wrote Chairwoman Ronna McDaniel in the letter.
McDaniel said GOP voters "have lost trust" in the commission and noted that the RNC has proposed a number of reforms to the debate process.
"Unfortunately, neither the tone nor substance of your latest response inspires confidence that the CPD will meaningfully address the serious issues which the RNC has raised," she said.
If the RNC moves to change its rules, the pullout would mark one of the greatest changes in the history of U.S. presidential debates, which the CPD has hosted for more than 30 years.
McDaniel detailed the timeline of the RNC's communications with the commission, which included a letter from the committee in June and discussions between the commission's co-chair Frank Fahrenkopf and David Bossie, the chair of the RNC's temporary presidential debates committee.
Fahrenkopf served as RNC chairman in the 1980s.
McDaniel said the commission's response to the list of demands from the RNC "so far seem designed to delay any reform until it is too late to matter for the 2024 election."
The Commission on Presidential Debates responded in a statement on Thursday, noting that it "deals directly with candidates for president and vice president who qualify for participation."
“The C.P.D.’s plans for 2024 will be based on fairness, neutrality and a firm commitment to help the American public learn about the candidates and the issues," the commission said.
According to the RNC's letter, the CPD pushed back on the RNC's request to appoint a nonvoting observer from the RNC or Democratic National Committee to attend its board meetings.
“In furtherance of our position as a nonpartisan, neutral body, which neither favors nor disfavors any party or candidate, we do not negotiate the terms or conditions of our operations with anyone," a letter from the commission, obtained by The New York Times, read.
This is not the first time Republicans have voiced criticism about the commission. Most recently, former President Trump complained that moderators in the 2020 presidential debates were biased against him, while in 2016 he singled out one of the commission's co-chair, Mike McCurry, for previously working as a press secretary in the Clinton administration.
Democratic National Committee Chairman Jaime Harrison responded in a statement on Thursday, accusing the RNC of deciding "they would rather hide their ideas and candidates from voters."
"During the last presidential election, the Republicans decided to not have a platform for the first time ever so it’s a natural progression, first no platform and now no debates," Harrison said. "Regardless of the RNC’s tantrum, voters can count on hearing from President Biden and Vice President Harris who are proud of their records.”
Posted by High Plains Pundit on January 13, 2022
Email ThisBlogThis!Share to TwitterShare to FacebookShare to Pinterest
Tags: National