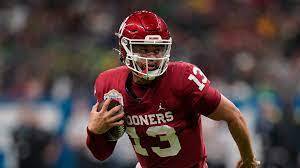 Former NFL quarterback Charlie Batch offered University of Oklahoma signal-caller Caleb Williams a $1 million name, image and likeness deal to play for his alma mater, Eastern Michigan University.
Batch offered the deal Thursday through investment firm GameAbove Capital. He tagged Williams on Twitter to ask if he had thought about playing for the Eagles.
“Hey @CALEBcsw, have you considered Eastern Michigan, @EMUFB?” Batch tweeted. “If not, you SHOULD. GameAbove Capital is prepared to pay you ONE MILLION DOLLARS for one year! Are you ready be an EAGLE?”
Batch is senior vice president of strategic investments for CapStone Holdings, the parent company of GameAbove Capital, according to USA Today.
Williams announced his entrance into the NCAA transfer portal Monday, The Washington Post reported. He indicated that his ex-head coach Lincoln Riley’s unexpected move to the University of Southern California influenced the choice.
Williams clarified that a return to Oklahoma under new head coach Brent Venables is possible in his transfer announcement.
The NCAA began allowing college athletes to profit off of the rights to their name, image and likeness in July. Previously, such deals were barred by organization rules requiring that players be amateurs.
Batch, who played at Eastern Michigan from 1994 to 1997, was the quarterback for the Detroit Lions before joining the Pittsburgh Steelers. He retired from the NFL in 2012.
Posted by High Plains Pundit on January 07, 2022
Email ThisBlogThis!Share to TwitterShare to FacebookShare to Pinterest
Labels: Sports