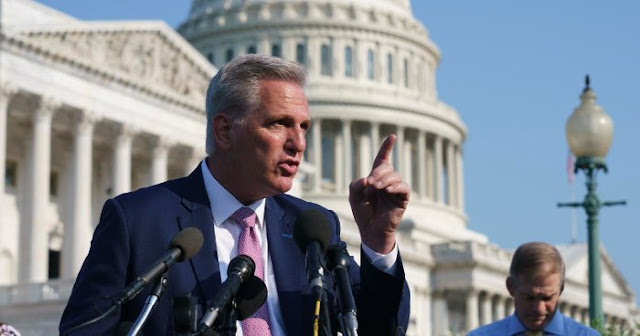 House Minority Leader Kevin McCarthy (R-Calif.) said Wednesday evening that he will not cooperate with the select committee investigating the Jan. 6, 2021, riot at the U.S. Capitol, asserting the panel "is not conducting a legitimate investigation."
McCarthy, in a statement released hours after the committee asked him to voluntarily cooperate with its probe, maintained that the "illegitimate" panel was seeking to interview him about “private conversations not remotely related to the violence that unfolded at the Capitol.”
The panel noted in its letter to McCarthy earlier Wednesday, however, that the GOP leader previously acknowledged speaking with former President Trump as the attack on the Capitol was underway.
McCarthy in his statement Wednesday night knocked the committee for subpoenas it has issued and criticized lawmakers for holding individuals in contempt of Congress.
He also slammed House Speaker Nancy Pelosi (D-Calif.) for rejecting two of his nominees to the Jan. 6 committee last year — GOP Reps. Jim Jordan (Ohio) and Jim Banks (Ind.) — writing that the panel is "not serving any legislative purpose."
Pelosi rejected the two GOP picks in July after Democrats raised objections to the Trump allies being on the panel, citing concerns over "the impact their appointments may have on the integrity of the investigation." She later appointed Reps. Liz Cheney (Wyo.) and Adam Kinzinger (Ill.), two GOP critics of Trump, to the committee.
“As a representative and the leader of the minority party, it is with neither regret nor satisfaction that I have concluded to not participate with this select committee’s abuse of power that stains this institution today and will harm it going forward,” McCarthy said Wednesday.
The Jan. 6 select committee sent a letter to McCarthy on Wednesday asking that he disclose information regarding his communications with former President Trump “before, during and after the violent Jan. 6 attack.”
The letter cited reporting from various outlets detailing the phone call McCarthy had with Trump during the riot, a conversation that the minority leader has publicly recognized.
Select Committee Chairman Bennie Thompson (D-Miss.) said the reporting he outlined “bears directly on President Trump’s state of mind during the January 6th attack as the violence was underway.”
McCarthy’s statement comes after two other GOP members of Congress refused to cooperate with the Jan. 6 committee’s probe. The panel sent similar, voluntary requests to Reps. Jim Jordan (R-Ohio) and Scott Perry (R-Pa.), both of whom declined to cooperate.
The committee has yet to issue a subpoena to a sitting lawmaker. The panel has also asked Fox News host Sean Hannity to voluntarily cooperate. Thompson said the committee is planning on issuing a similar invitation to former Vice President Mike Pence by the end of the month.
Thompson also said the panel is interested in knowing about communications McCarthy may have had with Trump, the president’s legal team, Jordan and others regarding his decision to continue objecting to election results after the Capitol building had been cleared of rioters.
Thompson also noted that McCarthy’s public statements regarding Jan. 6 “changed markedly” since he met with Trump at Mar-a-Lago in January after the former president had departed office. Days after the riot, Thompson noted, McCarthy had said Trump bore responsibility for the incident, and said he should have immediately denounced the protesters.
"At that meeting, or at any other time, did President Trump or his representatives discuss or suggest what you should say publicly, during the impeachment trial (if called as a witness), or in any later investigation about your conversations with him on January 6th?” Thompson asked.
National