Manchin says he won't vote to 'eliminate or weaken the filibuster' 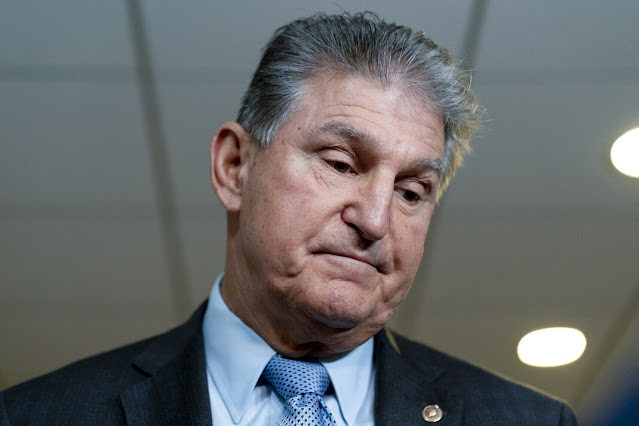 Sen. Joe Manchin (D-W.Va.) vowed on Thursday that he will not “vote to eliminate or weaken the filibuster,” the latest blow to Democratic hopes of changing the Senate rules to pass voting rights legislation.
Manchin issued a statement reaffirming his position shortly after fellow centrist Sen. Kyrsten Sinema (D-Ariz.), in a floor speech just before President Biden's meeting with the Senate Democratic caucus, said she would also not support changing the filibuster.
Manchin, in a statement, said that his colleagues pushing for rules change “do so without fully understanding the long-term institutional and democratic damage this will do to the Senate and our nation” and that it would “pour fuel onto the fire of political whiplash and dysfunction that is tearing this nation apart.”
“As such, and as I have said many times before, I will not vote to eliminate or weaken the filibuster,” he said.
Manchin has long warned that he doesn’t support a party-line rules change and has been wary of changes to the legislative filibuster, which requires 60 votes for most legislation to advance, more broadly.
His statement came hours after Biden met with the Senate Democratic caucus and urged them to pass voting rights legislation even if it meant changing the filibuster.
Biden appeared to acknowledge the potential for defeat after the meeting, telling reporters that “I hope we can get this done but I’m not sure.”
To change the rules without GOP support, Democrats would need total unity from all 50 of their members.
Sinema had dealt what appeared to be a fatal blow to Biden's efforts before Manchin.
“It is the view I continue to hold. It is the belief I have shared many times in public settings and in private settings,” Sinema said. “Eliminating the 60-vote threshold will simply guarantee that we lose a critical tool that we need to safeguard our democracy.”
Posted by High Plains Pundit on January 13, 2022
Tags: National