Manchin doubles down on filibuster 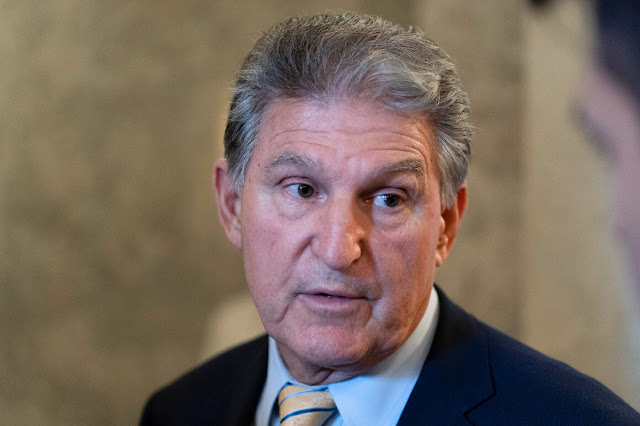 Sen. Joe Manchin (D-W.Va.) doubled down Tuesday on his support for the filibuster as President Biden heads to Georgia to publicly push for changes to the Senate rule in order to pass voting rights legislation.
“We need some good rules changes to make the place work better. But getting rid of the filibuster doesn’t make it work better,” Manchin told reporters.
Given support from Manchin and Sen. Kyrsten Sinema (D-Ariz.) for the legislative filibuster, which requires 60 votes for most bills to advance in the Senate, Democrats acknowledge that getting rid of it altogether isn’t on the table.
Instead, they are discussing smaller changes including moving to a talking filibuster, where opponents could delay the bill for as long as they could hold the floor but legislation would ultimately be able to pass with a simple majority. They are also mulling a carveout that would exempt voting rights legislation from needing 60 votes.
Democrats are also discussing smaller changes, including shifting from needing 60 votes to break a filibuster to needing 41 votes to sustain it or getting rid of the 60-vote hurdle currently required for starting debate while keeping it in place for ending debate.
But Republicans aren’t expected to support any of those rules changes, meaning Democrats would need to use the “nuclear option” that lets them change the rules via a simple majority.
Manchin hasn’t endorsed a rules change option and, in a potentially bigger hurdle for Democrats, he has long opposed changing the rules through the nuclear option.
He added on Tuesday that the rules should be changed by two-thirds of the Senate, referring to the 67 votes needed to change rules outside of the nuclear option.
“We need some good rules changes. We can do that together. But you change the rules with two-thirds of the people that are present so... Democrats, Republicans changing the rules to make the place work better. Getting rid of the filibuster doesn’t make it work better,” he said.
Manchin has previously floated more modest rules changes including getting rid of the 60-vote hurdle to start debate or moving from requiring 60 votes to three-fifths of those present and voting to break a filibuster. He's also acknowledged that a talking filibuster is a part of what is under discussion among Senate Democrats.
He reiterated some of those ideas during a subsequent interview on Tuesday, as well as the idea of guaranteed amendment votes and making it easier for bills that get significant support in committee to get votes on the floor.
"I'm looking at everything I can to make this place work. ...But to break the opportunity for the minority to particulate completely, that's just not who we are," Manchin said.
Democrats could change the rules on their own if they could get 50 senators to support the move and put Vice President Harris in the chair to break a tie.
But that would require both Manchin and Sinema to support not only changing the filibuster rule but also to change the rules along party lines.
Sen. Jon Tester (D-Mont.), who supports a talking filibuster, didn’t commit on Tuesday to using the nuclear option. Sen. Mark Kelly (D-Ariz.) also hasn’t endorsed a specific rules change proposal, telling reporters on Monday that he would wait to see the specifics.
Manchin’s comments come as Biden and Harris will speak in Georgia on Tuesday afternoon to push for the Senate to pass voting rights legislation.
Senate Majority Leader Charles Schumer (D-N.Y.) has vowed to take up election legislation this week and, if Republicans block it, to bring up a rules change vote by Monday, Jan. 17. Schumer hasn’t specified when the rules vote will occur, but senators and aides say they’ve been told to expect to be here this weekend and potentially into Monday.
A senior Democratic aide said on Tuesday that Schumer has invited Steven Levitsky and Daniel Ziblatt, professors and the authors of the book "How Democracies Die," to present to Democrats during their virtual caucus lunch “on their research and the urgency of passing voting rights legislation to address growing threats to democracy.”
Posted by High Plains Pundit on January 11, 2022
Email ThisBlogThis!Share to TwitterShare to FacebookShare to Pinterest
Labels: National