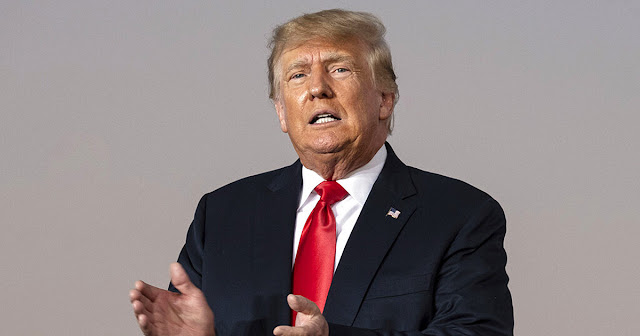 A federal judge on Monday questioned former President Trump's claims of "absolute immunity" in the face of a trio of civil lawsuits accusing him of fomenting the Capitol riot last year.
During a hearing, U.S. District Judge Amit Mehta appeared skeptical of Trump's argument that the suits from Democratic lawmakers and U.S. Capitol Police officers should be thrown out because a president's speech and actions while in office is completely protected from civil action.
"Is there anything the president could say while president of the United States that could subject him to civil suits?" said Mehta, who was appointed by former President Obama.
Jesse Binnall, Trump's attorney, said he could not think of a hypothetical example that would fall outside of the immunity that the former president is claiming.
"It's a purposely hard road to hoe, because the duties of the president are all-encompassing," Binnall said. "When that person holds the office, for that term of office, what a president does is constantly part of being the sole person responsible for the executive branch of government."
The lawsuits were filed last year against Trump, several members of his inner circle and groups of his supporters. One was brought by Rep. Eric Swalwell (D-Calif.) and another by Rep. Bennie Thompson (D-Miss.), chair of the House select committee probing the Jan. 6 riot who was later joined by 10 of his House Democratic colleagues.
A third lawsuit was filed by U.S. Capitol Police officers James Blassingame and Sidney Hemby, who argue that Trump should be held liable for the damages inflicted by the rioters.
The other defendants include Trump's personal attorney Rudy Giuliani, his son Donald Trump Jr., Rep. Mo Brooks (R-Ala.) as well as the right-wing Proud Boys and Oath Keepers organizations.
All of the defendants have raised numerous arguments for why the lawsuits should be thrown out, including First Amendment claims that their remarks ahead of the riot were protected speech.
During the hearing on Monday, Mehta heard the various arguments to dismiss the cases, and while he appeared skeptical of Trump's immunity claim, the judge did not entirely tip his hand on whether he intends to allow the lawsuits to proceed.
The House Democrats' lawsuits accuse Trump of violating an 1871 civil rights law known as the Ku Klux Klan Act, which was aimed at combating the hate group's violence and intimidation toward voters and public officials during Reconstruction.
The lawmakers argue that Trump and the other defendants "conspired to prevent, by force, intimidation and threats" Congress's certification of the Electoral College vote that delivered the White House to President Biden.
The plaintiffs point to the Jan. 6 "Stop the Steal" rally just before the attack on the Capitol, in which Trump and others exhorted the former president's supporters to "fight" Congress's certification of the 2020 election, citing baseless claims of widespread fraud that corrupted the results.
Trump is seeking to have the suits dismissed, arguing that the comments he made during the rally are protected from civil action because he was carrying out the normal duties of a president — namely speaking to his supporters about government issues — and that allowing judicial intervention over that conduct would disrupt the office of the president.
But the plaintiffs argue that Trump's alleged incitement of his supporters was delivered as a candidate making a campaign speech and thus falls outside of the immunity afforded to a president's official duties.
"Those are actions that have to fall outside the scope of the presidency," Joseph Sellers, an attorney for Thompson, said during Monday's hearing. "The president could promote treason in a public forum, and by Mr. Binnall's argument, the court would be powerless to assess whether his conduct ... is immune."
Still, Mehta appeared to be unsure about where president's legal shield begins and ends, expressing caution about setting a precedent that could hinder a president's speech.
"How does any judge make a distinction between what is speech in a purely personal capacity, which you say is not subject to immunity versus that which is within the presidential capacity?" Mehta asked.
Sellers, the attorney for Thompson, argued that the law makes plenty of distinctions between official duties and campaign activities, and that Trump's remarks fall far outside of the bounds of legitimate presidential speech that should be protected.
"What's been attributed to Mr. Trump is fomenting an insurrection directed at a co-equal branch of government that was either [intended to] or at least had the effect of disrupting the lawful function of the government, of the Congress," he said.
It's unclear when Mehta will issue his ruling.
Posted by High Plains Pundit on January 11, 2022
Email ThisBlogThis!Share to TwitterShare to FacebookShare to Pinterest
Tags: National