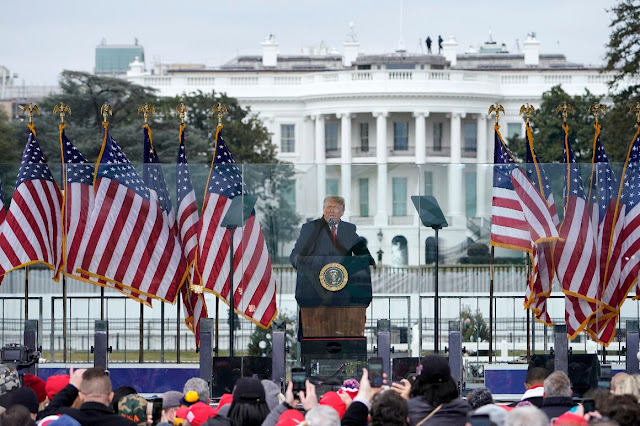 The House Committee investigating the Jan. 6, 2021, attack on the Capitol issued three new subpoenas Tuesday targeting those who assisted in planning former President Trump’s rally ahead of the riot, including a White House official who helped draft his speech that day.
The committee issued a subpoena to Ross Worthington, a White House adviser and speechwriter, along with Andy Surabian and Arthur Schwartz, Republican strategists the committee said were involved in rally planning.
The subpoenas say each of the men was in touch with a wide array of those in Trump’s orbit, including his son Donald Trump Jr., his girlfriend and White House adviser Kimberly Guilfoyle, rally organizer Caroline Wren, and others at the White House. Each was also said to have been in touch with Katrina Pierson, the Trump campaign spokeswoman, and Taylor Budowich, Trump’s spokesman.
“The Select Committee is seeking information from individuals who were involved with the rally at the Ellipse. Protests on that day escalated into an attack on our democracy. Protestors became rioters who carried out a violent attempt to derail the peaceful transfer of power. We have reason to believe the individuals we’ve subpoenaed today have relevant information,” Chair Bennie Thompson (D-Miss.) said in a statement.
The committee has already subpoenaed Pierson, Budowich and Wren.
Surabian and Schwartz both served as advisers to Trump, Jr., a sign the committee is edging closer to the Trump family – a group Thompson said would not be off limits.
Surabian also briefly served in the White House as strategist Steve Bannon’s deputy, but left shortly after his boss did.
Subpoenas to the two advisers note their involvement in discussions over appearance fees for speakers and media coverage of the rally. They were also reportedly involved in discussions over concerns of having right-wing provocateurs Alex Jones and Ali Alexander, both who have been subpoenaed by the committee, speak at the rally.
Worthington's subpoena focuses largely on his role in helping draft Trump’s speech, noting that it forwarded false claims that the election was stolen.
An attorney for Surabian said he was already working for a super PAC in support of Republican Senate candidates in Georgia by the time the rally took place.
"He had nothing at all to do with the events that took place at the Capital that day, zero involvement in organizing the rally that preceded it and was off the payroll of the Trump campaign as of November 15, 2020," attorney Daniel Bean said in a statement.
"Mr. Surabian is a close friend to Donald Trump Jr. and is running a Super PAC that opposes the reelection of one of the members of the committee. Accordingly, we believe this is nothing more than harassment of the Committee’s political opponents and is un-American to the core."
National