How will the Supreme Court rule on Biden's vaccine mandate for private businesses? 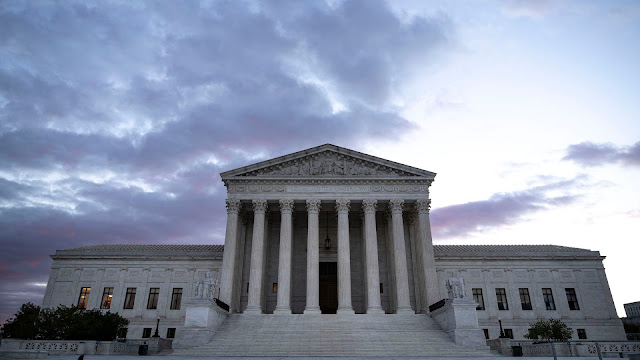 It is — as we say every time there is a big Supreme Court argument — hazardous to conclude too much about where the Supreme Court is going just from listening to oral argument. That said, for now, the argument on the Biden administration’s OSHA vaccine mandate looks like a 3–3–3 split among the justices.
The three liberals, of course, have argued aggressively and sometimes bizarrely in defense of federal power to impose a nationwide mandate via the mechanism of a workplace mandate.
Justices Clarence Thomas, Samuel Alito, and Neil Gorsuch have been less clear on exactly how far they are willing to go, but their questions suggest that they are, as usual, skeptical of vast claims of federal authority to displace states and regulate individuals based on an administrative agency claiming sweeping powers from a vaguely worded statute.
But the center of the Court in this case is likely to be Chief Justice John Roberts and Justices Brett Kavanaugh and Amy Coney Barrett. Each of those three seem to be thinking in more moderate terms. By “moderate” here I mean a decision that may find that OSHA has some authority in this area but cannot simply use a temporary, emergency power to sweep nationally, with little or no distinction among workplaces.
If I was a betting man, I’d guess that six justices find that OSHA has taken some steps here that exceeded its authority, but likely no more than two to four justices who are willing to hold that OSHA cannot, on the basis of its current, statutory authority, require any workplace to mandate vaccination.
Much attention in the argument focused on the major-questions doctrine, which is not actually a freestanding constitutional rule, but rather a rule of construction: courts should not presume that Congress has delegated authority to an agency on a particular topic if that authority is not explicit and the topic is a big, contentious national debate. Roberts, for example, pressed the point that the OSHA case is not being heard in isolation; the Biden administration is also trying to simultaneously use its authority over the institutions that receive Medicare and Medicaid (the topic of the day’s second argument), federal contractors, and federal employees to pursue a broader national policy of mandating vaccination without Congress having ever authorized such a thing.
That presents a knotty question. After all, if a series of statutes each clearly authorize particular steps, it should not be a constitutional problem for a presidential administration to bend them all in the direction of a single policy. That is how executive power is supposed to work, and in the usual case, it is not the Court’s job to look behind powers to motives.
That said, in the specific context of determining which questions are major, when a variety of vague, unrelated powers are being used as a workaround for the absence of an express, statutory authorization, and when the administration publicly says so, that is a pretty clear sign that the question is a major one and not simply an application of clear, existing authority. Roberts aired concern that a 50-year-old statute’s general terms were being read as “free rein” for the administration. Barrett expressed additional concern at the use of “emergency” authority.” “When does the emergency end?,” she asked. Would the administration still be claiming emergency powers two years from now? The solicitor general could not say no.
There is more to chew on in the lengthy argument, but the bottom line is that we should expect a fairly quick decision, and probably one that is entirely satisfying to neither side.
Opinion