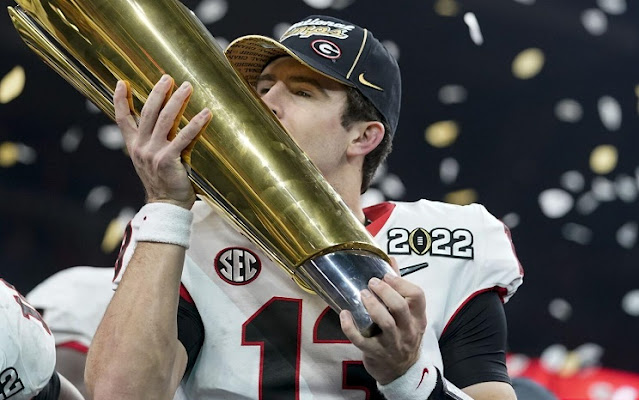 No. 3 Georgia exorcised myriad demons Monday night, overcoming No. 1 Alabama, coach Nick Saban and decades of close calls to win the 2022 College Football National Championship and claim its first crown since 1980. What started as a field goal fest opened up in the second half with the Bulldogs creating big plays on both sides of the ball and ultimately stemming the defending champion Crimson Tide, 33-18.
After being clearly rattled in the first half, Georgia quarterback Stetson Bennett played poised and confident over the final 30 minutes, throwing the final two offensive touchdowns of the game while completing 17 of 26 passes for 224 yards. Alabama QB Bryce Young, the 2021 Heisman Trophy winner, coughed up a deep interception -- his second turnover of the game -- that defensive back Kelee Ringo returned 79 yards for a touchdown to ice the game with less than a minute to play.
The Dawgs scored the game's final three touchdowns. Bennett found star freshman tight end Brock Bowers for a 15-yard score with 3:33 to play. On Georgia's prior possession, Bennett hooked up with Adoni Mitchell for an astounding 40-yard touchdown on a free play created by an offsides penalty on the Tide.
Alabama went with a pass-heavy attack despite leading most of the game as Young finished 35 of 57 for 369 yards with a touchdown and two picks. However, Young was without his top two pass catchers for most of the game due to another significant injury suffered in this second Alabama-Georgia meeting of the season.
Bama booted field goals of 37, 45 and 37 yards in the first half. The Tide hit on two big plays with Young finding Jameson Williams for 40 yards and later Cameron Latu for 61 yards. However, Williams -- Bama's leading receiver -- suffered a non-contact knee injury on his catch, leaving the Tide shorthanded for the duration of the contest.
Georgia connected on kicks of 24 and 49 yards to trail 9-6 at halftime. Bennett linked up with George Pickens on a deep post for 52 yards to create their team's first field goal and its best play of the opening 20 minutes.
Young committed the game's first major miscue early in the third quarter as he sailed a pass intercepted by Georgia's Christopher Smith at the Bama 43. He responded by driving the Tide down the field on the next possession only for Georgia's defense to come up big again by blocking a 48-yard field goal attempt.
A 67-yard run by James Cook, the longest allowed by the Tide since 2015, put the Dawgs into the red zone. They found paydirt later for the first touchdown – and their first lead -- of the game as Zamir White rumbled into the end zone to give Georgia a 13-9 lead. On the next possession, Young found Agiye Hall, who dropped a key pass on the prior drive, for 28 yards down to the UGA 5; however, Alabama stalled again and kicked its fourth field goal of the game from 21 yards out.
Bennett gave the Tide the ball back a couple plays later in the fourth quarter as he fumbled while being sacked on third down. Defensive back Brian Branch, scooping up a ball he thought was an incomplete pass, lucked into a fumble recovery with Alabama taking over at the UGA 16. Young hooked up with Latu for a 3-yard TD reception, putting the Tide back on top 18-13 after a failed two-point conversion.
"I just knew there was going to be no way we were going to let a turnover like that stop us from winning a national championship," Bennett told ESPN after the game. "I wasn't going to be the reason we lost."
The Dawgs took off from there, responding with Mitchell's touchdown, extending their lead to eight points on the back of Bowers' score and then clinching their national championship win with the game-ending pick six.
Posted by High Plains Pundit on January 10, 2022
Tags: Sports