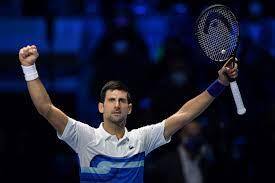 A court ruled on Monday that tennis star Novak Djokovic, who was blocked from entering Australia because he is not vaccinated against COVID-19, can remain in the country.
Federal Circuit Court Judge Anthony Kelly ordered the government to free Djokovic from a Melbourne hotel where he was quarantining, according to The Associated Press. The tennis star had been staying at the hotel for the previous four nights.
Kelly ruled that Djokovic did not have enough time to speak with his lawyers before his visa was revoked last week for not fulfilling an exception to COVID-19 vaccination requirements, the AP noted. Australia requires that all non-citizens are fully inoculated against the virus upon entry.
He noted that a delegate for the home affairs minister decided at 7:24 a.m. on Thursday that Djokovic's visa would be canceled. If the tennis star had received more time, however, he could have made an argument as to why his documentation was valid, the judge said.
“If the applicant had had until 8:30 a.m., he could have consulted others and made submissions to the delegate about why his visa should not be canceled,” Kelly said while reading out an agreement between the government and Djokovic’s attorneys, according to NBC News.
Government lawyer Christopher Tran, however, told Kelly that Australia’s immigration minister “will consider whether to exercise a personal power of cancellation,” according to the AP. That puts the tennis star at risk of being deported before the Australian Open, which is set to begin on Jan. 17.
Such a move could also prevent him from entering Australia for three years.
Border police stopped Djokovic upon approval to Australia on Jan. 5, when his passport was seized. He has previously announced on Instagram that he received “exemption permission” allowing him to travel to Australia to play in the tournament, according to NBC News.
He said he was exempt from receiving the vaccine because he tested positive for the virus in December and had since recovered. Officials, however, canceled his visa, claiming that he did not provide valid evidence to enter the country.
Kelly, at a hearing on Monday before the ruling dropped, said he was “agitated” over Djokovic’s treatment by border officials.
Posted by High Plains Pundit on January 10, 2022
Email ThisBlogThis!Share to TwitterShare to FacebookShare to Pinterest
Labels: Sports, World