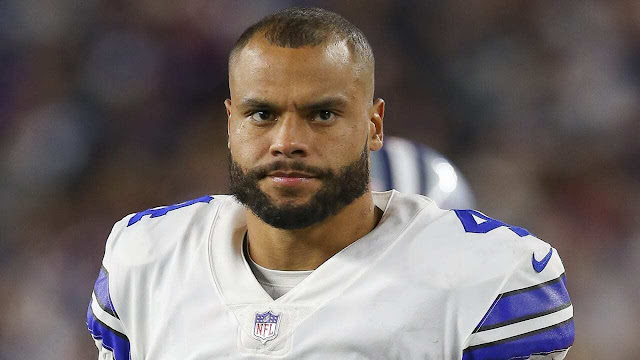 In keeping with a New Year’s resolution to be slightly less cynical when possible, I will suggest the Cowboys successfully played the long game Sunday. There is a greater than average chance the Arizona Cardinals will return here for a playoff game in two weeks, so maybe the Cowboys didn’t want to unveil too much at AT&T Stadium.
OK, enough of that.
The Cardinals could still win the West if the Rams lose to San Francisco a second time next weekend. Otherwise, you can expect an Arizona-Dallas rematch here thanks to the Cardinals’ 25-22 victory Sunday, in which Kyler Murray outplayed Dak Prescott, Kliff Kingsbury outcoached Mike McCarthy and the team with the three-game losing streak dominated play to take a 22-7 lead into the fourth quarter before the Cowboys could make it close.
“I guess I’ll see you in two weeks,” Kingsbury said as he headed for the bus with Arizona’s eighth road win. The Cowboys missed a late chance to get the ball back on the replay of a possible fumble because Dallas was out of timeouts. Arizona had forced Dallas to burn a third quarter timeout when it looked like the Cards’ offense would skip a short field goal and go for a first down on fourth-and-5, causing confusion with Dallas’ defense and special teams.
Mostly, though, this was a game that showed last week’s 56-point outburst to have been a false positive. We wondered at the time how much an exhausted going-nowhere Washington team had to do with Dallas’ 56-14 explosion, and the answer turns out to be a hell of a lot.
A team that scored 42 points in the first two quarters against Washington put up seven in three quarters against the Cardinals. And Arizona surrendered 30 in consecutive games to the Rams and Lions during a December losing streak that reduced the Cards from No. 1 seed to probable wild card status.
The Cowboys are now the likeliest 4 seed, and some uneven play from No. 4 had much to do with it. Dak was not terrible (although he lost a big fumble in the fourth quarter) but he was never breathtaking, either. One week after throwing for 320 yards and four touchdowns in a single half against Washington, Prescott went back to looking uncertain in the pocket and completed only a single short pass for 9 yards to both Amari Cooper and CeeDee Lamb before the fourth quarter.
In the third quarter, when Murray was extending Arizona’s 13-7 halftime lead to 22-7, Prescott was 1-for-7 passing for 12 yards. The team had 13 yards rushing in the period, and Dak accounted for 12 of them.
“I’m not discouraged. I’m disappointed we didn’t come away with the win,” Prescott said. “All of us have got to look at ourselves in the mirror.”
And who knows what they might see? Next week’s game in Philadelphia is largely irrelevant when it comes to the playoffs. But how can anyone suggest they know what to expect from a Dallas offense ranked No. 1 most of the season in total yards but unable to generate big points or winning drives against the toughest opponents. Since they were 6-1, the Cowboys have gone 5-4. They have played three teams in that stretch with winning records and lost them all.
It’s not an enormous surprise that Murray, who played like a league MVP in the season’s first half, would get the better of Dak. It is a surprise that it took until the fourth quarter for Dak to get a longer completion than Cards safety Chris Banjo managed on a fake punt (23 yards).
Arizona is not known for having lockdown corners, but Dak spent much of the day focused on dumping shorter passes to tight end Dalton Schultz and occasionally wide receiver Cedrick Wilson. With 226 yards passing, he averaged just under 6 yards per attempt, while Zeke Elliott and Tony Pollard ran 12 times for 25 yards.
“Dak had a tough game, the things he had to deal with,” McCarthy said. “They threw a lot of things at us. We didn’t run the ball the way you would anticipate, and that’s something we have to have. It’s clearly our identity.”
I’m not so sure. There are no more excuses about missing this lineman or that one. In fact, other than Zack Martin, they were just about all cited for drive-stopping penalties. Pollard didn’t show any burst except being wide open on one downfield pass, and Zeke clearly isn’t a player they trust on third-and-short any more. He’s down to 4.2 yards per carry and will miss the 1,000-yard rushing mark in the NFL’s first 17-game season unless he rambles for 85 yards in Philadelphia.
Whether the Cowboys face Arizona again or the Rams in two weeks, what’s the level of confidence that this offense can motor up and down the field against either one?
Posted by High Plains Pundit on January 03, 2022
Email ThisBlogThis!Share to TwitterShare to FacebookShare to Pinterest
Labels: Sports