Biden to meet with Senate Democrats in voting rights push 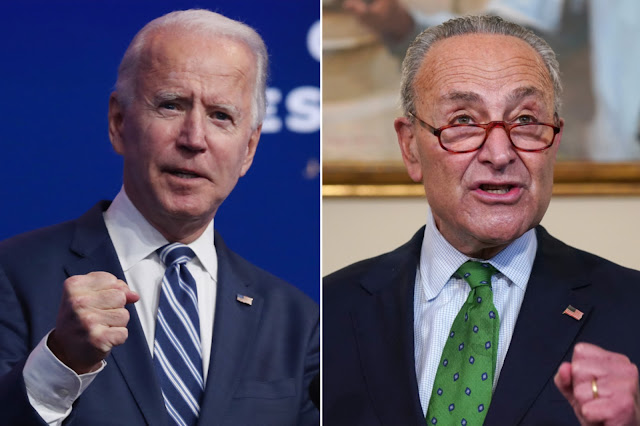 President Biden will meet with Senate Democrats on Thursday amid a push for his party to change the filibuster and pass voting rights legislation.
Biden, according to the aide, will attend a closed-door Democratic caucus lunch "to discuss the push to pass voting rights and potential changes to Senate rules."
The meeting comes as Biden is stepping up his public push to get voting rights legislation through the Senate in the face of GOP opposition, as progressive groups have urged him to lean into the fight to win over members of his own party on changing the rules after Democrats missed self-imposed deadlines last year.
Biden traveled to Georgia this week, where he publicly urged Senate Democrats to pass a bill, including changing the legislative filibuster, which requires 60 votes for most legislation, in order to get it done.
Though he's previously expressed an openness to changing the Senate's rules, he gave a full-throated endorsement during his speech, saying that he supports changing the rules “whichever way they need to be changed to prevent a minority of senators from blocking action on voting rights."
Biden's decision to attend the Senate Democratic lunch, giving him the chance to lobby Senate Democrats directly, is the latest escalation of a high-profile — yet uphill — bid to change the Senate's filibuster rule after Republicans previously used it to block to sweeping election bills and separate legislation named after the late Rep. John Lewis (D-Ga.) that would strengthen the 1965 Voting Rights Act.
Senate Majority Leader Charles Schumer (D-N.Y.) has vowed to bring up election-related legislation and if Republicans, as expected, block it, to hold a vote on changing the Senate's rules by Monday, Jan. 17.
Neither Sens. Joe Manchin (D-W.Va.) nor Kyrsten Sinema (D-Ariz.) have said they will vote to change the rules, though Democratic senators met with them on Tuesday night and Wednesday morning.
Democrats haven’t yet landed on a filibuster reform proposal as around-the-clock negotiations continue among the caucus. One option includes moving to a talking filibuster, where opponents could delay the bill for as long as they could hold the floor, but legislation would ultimately be able to pass with a simple majority. They are also mulling a carveout that would exempt voting rights legislation from needing 60 votes.
Democrats are also discussing smaller changes including shifting from needing 60 votes to break a filibuster to needing 41 votes to sustain it or getting rid of the 60-vote hurdle currently required for starting debate while keeping it in place for ending debate.
Posted by High Plains Pundit on January 12, 2022
Tags: National