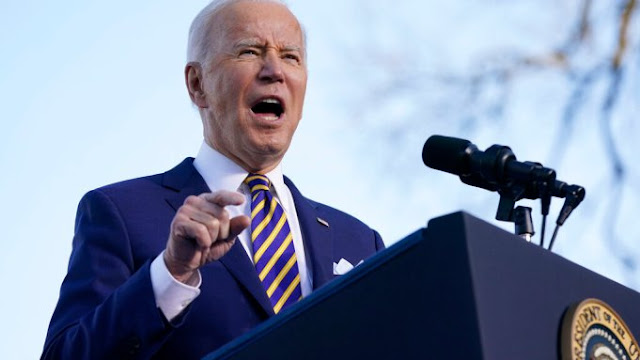 President Biden on Tuesday gave his full-throated endorsement for changing Senate rules to allow federal voting rights legislation to pass via a simple majority instead of a 60-vote threshold.
Biden has in the past expressed an openness to tweaking Senate rules, such as reinstating the talking filibuster. But in Tuesday’s remarks, he made clear he supports changing the rules “whichever way they need to be changed to prevent a minority of senators from blocking action on voting rights," setting the stage for a high-stakes fight in the Senate.
“Sadly, the U.S. Senate, designed to be the world’s greatest deliberative body, has been rendered a shell of its former self. It gives me no satisfaction in saying that as an institutionalist, as a man who was honored to serve in the Senate,” Biden said. “But as an institutionalist, I believe the threat to our democracy is so grave that we must find a way to pass these voting rights bills."
“Debate them, vote, let the majority prevail,” Biden continued. “And if that bare minimum is blocked, we have no option but to change the Senate rules, including getting rid of the filibuster for this.”
The president spoke in Georgia alongside Vice President Harris in the White House’s most concentrated effort to date to put the spotlight and pressure on federal lawmakers in the fight to enact stronger voting protections.
He framed the fight over voting rights as a matter of historical significance, suggesting lawmakers must decide whether they want to “be on the side of Abraham Lincoln or Jefferson Davis,” referencing the former U.S. president and the president of the Confederacy, respectively.
Georgia was an intentional backdrop for the speech given its rich history with civil rights figures like Martin Luther King Jr. and the late Rep. John Lewis (D-Ga.), as well as recent efforts by state Republicans to enact new voting laws after former President Trump’s repeated false claims sowing doubt about the 2020 election results.
Biden called on the Senate to advance two pieces of federal voting rights legislation: the Freedom to Vote Act and the John Lewis Voting Rights Advancement Act. He described both measures as remedies to efforts by Republican-led state legislatures to pass bills making it more difficult for certain groups to vote.
“I’ve been having these quiet conversations with members of Congress for the last two months. I’m tired of being quiet,” Biden said, pounding the lectern for emphasis.
Biden argued the two bills would directly address some state-level bills that were passed last year to make mail-in voting tougher and give more autonomy to elected officials over counting ballots, or what he deemed "Jim Crow 2.0."
Senate Majority Leader Charles Schumer (D-N.Y.) has vowed to take up election legislation in the coming days. If Republicans block it, which is expected, Schumer has said he will bring up a rules change vote by Monday, Jan. 17.
But a handful of moderate Democrats, most notably Sens. Joe Manchin (D-W.Va.) and Kyrsten Sinema (D-Ariz.), have been vocal opponents to gutting the filibuster, warning it could backfire if Republicans retake the majority.
“We need some good rules changes to make the place work better. But getting rid of the filibuster doesn’t make it work better,” Manchin told reporters hours before Biden’s speech.
The president did not specifically name Manchin, Sinema, or any other member of the Senate. But he argued history would harshly judge any lawmaker who stood in the way of securing the right to vote at a time when democracy in the U.S. was facing grave threats.
"This is one of those defining moments in American history," Biden said. "Each one of the members of the Seante is going to be judged by history on where they stood before the vote and where they stood after the vote. There’s no escape."
The resistance from some corners of Biden’s own parties has left activists frustrated. A number of Georgia civil rights groups issued a statement in advance of Biden’s visit saying the president shouldn’t bother coming to the state without a concrete plan for passing voting rights bills.
Martin Luther King III, who met with Biden and Harris prior to their speeches, said in a statement in advance of Biden’s trip that he understood the frustration of those groups and hoped to express to Biden “that his visit cannot be a mere formality.”
“We’ve seen what’s possible when President Biden uses the full weight of his office to deliver for bridges, and now we need to see him do the same for voting rights,” King and his wife, Arndrea Waters King, said in a statement.
Posted by High Plains Pundit on January 12, 2022
Email ThisBlogThis!Share to TwitterShare to FacebookShare to Pinterest
Labels: National