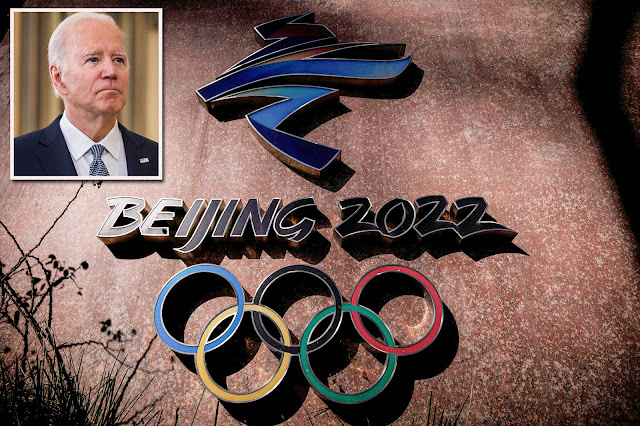 The White House has announced a diplomatic boycott of the 2022 Beijing Olympics, saying the U.S. will not send any government officials to the Chinese capital for the Winter Games.
“The Biden administration will not send any diplomatic or official representation to the Beijing 2022 Winter Olympics and Paralympic games given [China's] ongoing genocide and crimes against humanity in Xinjiang and other human rights abuses,” White House press secretary Jen Psaki told reporters on Monday.
“The athletes on team USA have our full support, we will be behind them 100 percent as we cheer them on from home. We will not be contributing to the fan fare of the games. U.S. diplomatic or official representation would treat these games as business as usual in the face of the PRC's egregious human rights abuses and atrocities in Xinjiang and we simply can’t do that.”
Last month, President Biden said a diplomatic boycott was "something we are considering.” At that time, the White House said Biden had “serious concerns” about issues in China, including human rights abuses.
“As the president has told President Xi, standing up for human rights is in the DNA of Americans. We have a fundamental commitment to promoting human rights and we feel strongly in our position, and we will continue to take actions to advance human rights in China and beyond,” Psaki added on Monday.
The president spoke to Chinese President Xi Jinping last month, but the White House has said the 2022 Olympics were not a part of their discussion. The announcement comes ahead of the virtual Summit for Democracy, which the Biden administration is hosting on Thursday and Friday and will include over 100 participants from governments, civil society and the private sector.
“I don’t think that we felt it was the right step to penalize athletes who have been training, preparing for this moment and we felt that we could send a clear message by not sending an official U.S. delegation,” Psaki said when asked why the U.S. are not pulling American athletes.
She also said the White House has informed allies of their decision but will leave it to them to make their own decision about whether to boycott as well.
Beijing has criticized the idea of a diplomatic boycott from the U.S. and on Monday Chinese Foreign Ministry spokesperson Zhao Lijian called the move “politically manipulative,” ABC reported.
When asked about potential countermeasures from the Chinese Foreign Ministry, Psaki said she didn’t have anything to read out on their intentions.
“Our view is that’s not the right way to view or frame our relationship. Our view is that cooperation on transnational issues is not a favor to us, it is not a transactional, the PRC should be taking action on issues where the global community, to meet the needs of the global community,” Psaki said when asked if the PRC has indicated to the administration what sort of action they might take.
The U.S. and international community have a long list of condemnations and concerns over China’s human rights abuses, including its crackdown on Uyghur Muslims in Xinjiang, which the U.S. and some other countries have labeled a genocide, and repression of democratic freedoms in Hong Kong.
Most recently, China has drawn immense scrutiny over the case of the tennis star Peng Shuai, who disappeared from public view after she made accusations of sexual assault. The Biden administration says it is monitoring the situation surrounding Peng closely and the Women’s Tennis Association has since suspended its tournaments in China.
The Senate in June passed an amendment, spearheaded by Sen. Mitt Romney (R-Utah), that would mandate one in light of China’s ongoing human rights abuses, including against the Uyghur ethnic minority.
Romney had called for a diplomatic boycott in March and said the administration’s move on Monday was “right.”
Romney in an op-ed in March mentioned former President Carter’s decision to fully boycott the 1980 Moscow Games, arguing that, unlike then, U.S. athletes should be allowed to compete in Beijing.
Speaker Nancy Pelosi (D-Calif.) in May backed a diplomatic boycott, saying the U.S. “cannot proceed as if nothing is wrong about the Olympics going to China.”
Sens. Tom Cotton (Ark.) and Marsha Blackburn (Tenn.) called for Biden to implement a full boycott of the Winter Olympics and for Team USA athletes to not compete.
When asked if a diplomatic boycott is enough, Psaki said this is not the end of the concerns the U.S. will raise about the human rights abuses in China.
“This is just sending a message that given these human rights abuses, we can’t proceed as business as usual," she said.
House Foreign Affairs Committee Chairman Gregory Meeks (D-N.Y.) commended the announcement and called it “absolutely the right decision” on Monday.
Rep. Michael McCaul (R-Texas), the top Republican on the House Foreign Affairs Committee, said he is glad the administration will not send officials and said it “has been the obvious choice for some time.”
Posted by High Plains Pundit on December 06, 2021

Email ThisBlogThis!Share to TwitterShare to FacebookShare to Pinterest
Tags: World