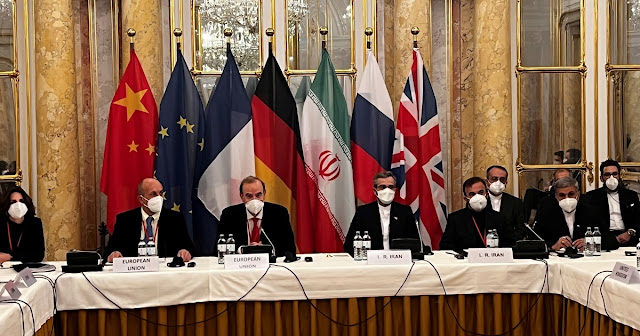 Defense Secretary Lloyd Austin met with his Israeli counterpart Thursday to discuss concerns over Iran and its destabilizing activities, the Pentagon confirmed.
While the Defense Department confirmed the meeting, a spokesman declined to address a Reuters report that said the two defense leaders would also touch on possible Iran-focused military exercises.
“I know there’s interest in a certain Reuters report,” Pentagon press secretary John Kirby told reporters on Thursday prior to the meeting.
“I will tell you this, we routinely conduct exercises and training with our Israeli counterparts and I have nothing to announce to or speak to or point to or speculate about today.”
Kirby would only say that Austin and Israeli Defense Minister Benjamin Gantz would discuss Iran and its continued destabilizing activities.
Gantz had tweeted Wednesday to say he and Austin would “discuss possible modes of action to ensure the cessation of [Iran's] attempt to enter the nuclear sphere and broaden its activity in the region.”
Reuters reported that the two defense chiefs were expected to talk about possible military exercises meant to prepare for a worst-case scenario to destroy Iran's nuclear facilities should the United States and Iran not be able to revive a 2015 nuclear deal abandoned by then-President Trump.
A senior U.S. official told Reuters that on Oct. 25 Pentagon leaders briefed White House national security adviser Jake Sullivan on military options available to prevent Iran from producing a nuclear weapon.
The two meetings come as indirect talks on restarting a nuclear deal with Tehran have hit a snag, with very little progress being made during negotiations in Vienna.
Iran has already restarted production of enriching uranium, amassing a small stockpile of the material of at least 60 percent purity. Uranium needs to be enriched to 90 percent purity for nuclear weapons development.
Further signaling that the Biden administration is preparing for a possible fallout, the U.S. is considering sending a delegation to the United Arab Emirates, a close trading partner of Iran, to discuss possible economic sanctions, The Wall Street Journal reported Thursday.
Iran, meanwhile, has denied it is seeking to develop nuclear weapons and only wants to master the technology.
Nuclear negotiations were expected to resume on Thursday, and the U.S. special envoy for Iran, Robert Malley, is set to join them over the weekend.
Posted by High Plains Pundit on December 09, 2021
Tags: World