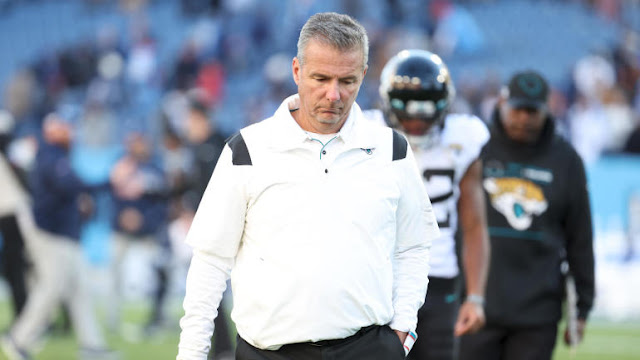 After dealing with multiple controversies, the Jacksonville Jaguars have finally had enough of Urban Meyer. According to ESPN.com, Meyer has been fired by the team in a move that was announced after midnight on Thursday morning.
The firing ends a tumultuous run for Meyer, who was mired in several controversies during his short time in Jacksonville. The move by the team comes on the same day that former Jags kicker Josh Lambo made an accusation that Meyer once kicked him during a team practice.
"I'm in a lunge position. Left leg forward, right leg back," Lambo told The Tampa Bay Times. "While I'm in that stretch position, [Meyer] comes up to me and says, 'Hey Dips--t, make your f--king kicks!' And kicks me in the leg."
After being kicked, Lambo said that he responded by telling Meyer "Don't you ever f---ing kick me again" and Meyer responded to that by telling his former kicker, "I'm the head ball coach. I'll kick you whenever the f--- I want."
When it comes to his time in Jacksonville, that incident seemed to be the last straw for Jaguars owner Shad Khan. As recently as Monday, Khan insinuated that Meyer would likely make it through the season, but he clearly changed his mind on that issue at some point over the past 48 hours.
In a statement, Khan said that he dumped Meyer because he felt that an immediate change was necessary.
"After deliberation over many weeks and a thorough analysis of the entirety of Urban's tenure with our team, I am bitterly disappointed to arrive at the conclusion that an immediate change is imperative for everyone," Khan said. "I informed Urban of the change this evening. As I stated in October, regaining our trust and respect was essential. Regrettably, it did not happen."
As Khan noted, Meyer was already on thin ice due to his actions on October. After a Thursday night game in Cincinnati, the Meyer decided to stay in Ohio instead of flying back to Florida with the team. During his time in the Buckeye state, Meyer spent some time at his restaurant in Columbus and while there, he was caught on video suggestively dancing with a woman who wasn't his wife.
After the incident, Meyer apologized to the team, but even with that, it was still clear that Khan wasn't happy with him. Following the apology, Khan made it clear that the Meyer would have to regain his trust.
"I appreciate Urban's remorse, which I believe is sincere," Khan said in October. "Now, he must regain our trust and respect. That will require a personal commitment from Urban to everyone who supports, represents or plays for our team. I am confident he will deliver."
In the weeks after the incident, things seemed to be getting better in Jacksonville with the Jaguars winning two of their next four games, but that hot streak didn't last long. The Jags are currently on a five-game losing streak that started in Week 10 and frustration seemed to boil over with every loss during the streak.
If the Jaguars were winning games or if the team was improving every week, this is stuff that Khan might have been able to overlook, but with Meyer seemingly involved in a new controversy every week, the Jags owner knew  he couldn't ignore what was happening.
Not only did Meyer seem to be losing the locker room, but he wasn't helping the development of Trevor Lawrence, who was selected with the No. 1 overall pick in the 2021 NFL Draft. Even Lawrence and Meyer have been at odds at times with the quarterback wondering why running back James Robinson got benched in a recent game.
With Meyer out, offensive coordinator Darrell Bevell will serve as interim head coach for the rest of the season. One upside for the Jaguars in firing Meyer now is that they'll be able to start their search for a new coach in the next few weeks. Under a new NFL rule that was just passed Wednesday, a team that fires its coach can start interviewing candidates once there are just two weeks left in the regular season, which means Jacksonville can start talking to potential replacements as soon as Dec. 28.
Sports