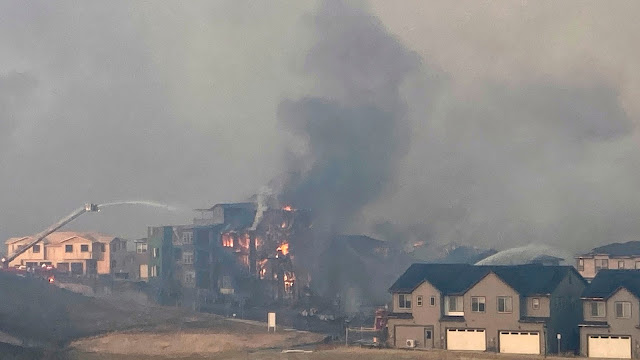 Two northern Colorado cities on Thursday were ordered to evacuate due to quickly spreading wildfires that burned down hundreds of homes in the Denver area.
Boulder County Sheriff Joe Pelle said in a press briefing that an entire subdivision of 370 homes in Superior had been burned, NBC News reported. An additional 210 homes in the city's old town neighborhood were also destroyed.
Apart from homes, a hotel and shopping center were also incinerated and the fire came close to a hospital.
"This was a horrific event.” said Pelle. According to the sheriff, no deaths had reported as of Thursday night, but he said he would not be surprised to find casualties. One officer was injured by flying debris.
“This is the kind of fire we can’t fight head on,” Pelle added. “We actually had deputy sheriffs and firefighters in areas that had to pull out because they just got overrun."
Kelli Christensen, spokesperson for UCHealth Broomfield Hospital, told The Associated Press that six people injured in the fire are being treated at the hospital.
The Boulder County Office of Emergency Management issued evacuation orders for both Louisville and Superior.
The town's Twitter account stated that Superior's evacuation point is the South Boulder Recreation Center. The local Superior Community Center is not an evacuation point.
The Louisville Police Department told residents to leave "quickly" and to travel east. One evacuation point for Louisville residents is the YMCA in Lafayette, Colo. The Flatirons Community Church will also be allowing people to rest at its Lafayette campus, though overnight stays will not be allowed.
The fire, located northwest of Superior, is one of multiple fires that started on Thursday. Some of the fires were caused by downed powerlines, The Associated Press reported. A fire has also shut down a portion of U.S. Highway 36 near the area.
Fast-moving grass fire south of Boulder visible from our office. Multiple wildfires burning across the county.
Colorado Gov. Jared Polis (D) wrote on Twitter, "Prayers for thousands of families evacuating from the fires in Superior and Boulder County. Fast winds are spreading flames quickly and all aircraft are grounded."
Posted by High Plains Pundit on December 30, 2021
Email ThisBlogThis!Share to TwitterShare to FacebookShare to Pinterest
Labels: National