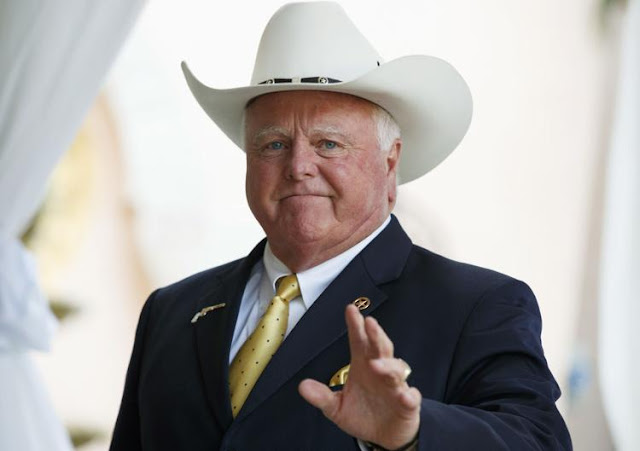 By Bethany Blankley
Three Republicans are running for Texas Agriculture Commissioner, all saying they are conservatives.
One is the incumbent commissioner, another is Black Voices for Trump advisor and the third is a rancher with first-hand knowledge of agricultural policies and a political newcomer.
The incumbent, Commissioner Sid Miller, is running for reelection after first being elected in 2014. A former state representative, Miller served in the Texas legislature from 2003 to 2013.
One of his challengers, state Rep. James White, R-Hillister, serves in the state House after first being elected in 2010.
Carey Counsil, a fifth-generation rancher, local Brenham business owner, real estate developer, Blinn College economics professor, and political newcomer, is the third candidate.
The Texas Agriculture Commissioner, which leads the state Department of Agriculture, is tasked with promoting agricultural production, protecting consumers, spurring economic development, and overseeing rural health and school lunch programs, among other duties.
Miller, perhaps the most controversial, has been a thorn in the side of Republican leadership, criticizing them for not enacting the majority of conservative policies promoted by the Texas Republican Party delegation and for advancing policies he’s argued are unconstitutional.
In March, Miller was among several Texans who sued Republican Lt. Gov. Dan Patrick and the Texas Senate over a mandatory COVID-19 testing requirement. He argued the mandate was unconstitutional, and conflicted with policies implemented by Republican Gov. Greg Abbott, who at the time had just waived the statewide mask mandate and declared Texas “100 percent open.”
Miller also joined another lawsuit filed against Abbott, after the governor single-handedly changed election law, a power only given to the legislature, by extending the early voting period in November 2020. Prior to the election, Harris County Democrats implemented a drive-through voting scheme, and those who sued over it alleged increased voter fraud because of extended early voting.
A vocal critic of the governor, Miller penned an open letter to Abbott last fall over his ongoing lockdown policies. He wrote, “It’s time to STOP THE INSANITY … There is simply no logic to continuing to crush the liberties of free people of Texas for the sake of fear and politics.”
White cites his own “experience on agriculture issues, and commitment to integrity and ethics” as one reason why he’s running. A new member of the Texas Freedom Caucus, several of his caucus colleagues have endorsed him, as has House Speaker Dade Phelan, R-Beaumont.
White is among 25 state lawmakers who’ve called for a fourth special legislative session after Abbott and lawmakers didn't address employer vaccine mandates.
An Army veteran, White served as an advisory board member for Black Voices for Trump, is a proponent of strong border security, reducing taxes and bureaucratic red tape. As the chairman of the House Homeland Security and Public Safety Committee, White was instrumental in helping get permitless carry legislation passed earlier this year.
In a recent interview with Brenham’s KWHI 1280 AM radio station, Counsil explained why he was running: to address the wage and profit gaps from producer to distributor to consumer, securing water rights, and other agricultural issues impacting all Texans.
He said, “I see a huge disparity between the consumer and the producer, and we’ve got to correct that disparity. There is a huge disparity – what you are seeing at the grocery stores and … what the farmers actually get.”
Farmers are being paid far less than what consumers are paying, he said. Grocery stores are jacking up prices that don’t reflect the true value of the produce they’ve purchased, hurting Texas consumers and farmer in the process, he added.
Another disparity that hasn’t been solved for years in Texas is the issue of water rights.
Counsil argues, “The government is wanting to take the water above the ground, and they are also interested in the subterranean water rights of different states, and some of the states are succumbing to the water rights. I just don’t see that the water rights are anyone’s business other than the landowner, so that is something I want to get out there and protect.”
Counsil said he wants to be a liaison between Austin and property owners, and “the spokesperson for the common, everyday man.”
Appealing to all Texans as a political outsider, he said, “I am a proponent for the agriculture industry. I don’t have a whole lot of political experience, but I think the common person is tired of the typical politician.”
The candidate filing period for the 2020 election ends Dec. 13. The primary election is scheduled for March 1, 2022.
Posted by High Plains Pundit on December 01, 2021
Tags: Texas