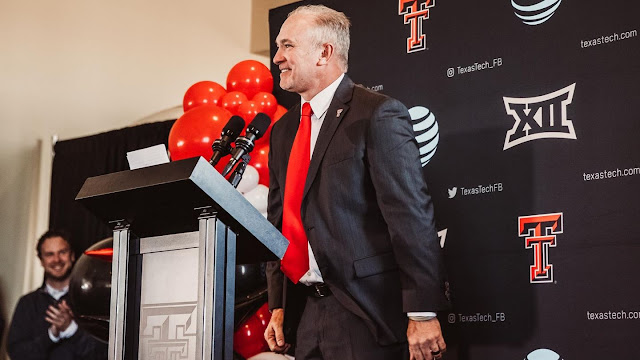 Texas Tech reaped the benefits of head coach Joey McGuire's ties throughout the state of Texas on Wednesday as the Red Raiders officially signed 16 high school prospects to National Letters of Intent to start the early signing period.
Since his hire in early November, McGuire and his staff quickly assembled one of the top signing classes in recent memory as Texas Tech currently ranks inside the top 40 nationally by both Rivals and 247Sports. McGuire had just over a month to finalize the star-studded list, which currently ranks as the highest-rated class for the Red Raiders since 2015 by 247Sports and 2012 by Rivals.
"Today was a great day for the future of Red Raider Football," McGuire said. "This class will be the cornerstone of our future success here at Texas Tech, and we are so fortunate that these signees and their families chose to be Red Raiders. We can't wait to get each of these kids to campus to start working on building a championship program our fans and supporters can be proud of each time we take the field."
The class of high-school prospects adds to the three transfer signees announced Tuesday in wide receiver Brady Boyd (Minnesota), linebacker Dimitri Moore (Missouri State) and defensive back Tyler Owens (Texas). All three will enroll at Texas Tech at semester alongside high school signees Joseph Adedire (Arlington, Texas), Landon Hullaby (Mansfield, Texas), Ty Kana (Katy, Texas), Kaden Weatherby (Aurora, Colo.) and Trevon McAlpine (Saraland, Ala.).
Texas Tech leaned heavily on the defensive side of the ball with 11 high school signees set to join new coordinator Tim DeRuyter's scheme. The class positioned the Red Raiders for depth in the trenches as the Red Raiders inked three offensive linemen and four on the defensive front to go along with a trio of linebackers.
McGuire and his staff will add to the class further in the coming months through additional transfer signees and high school prospects. The spring signing period kicks off Feb. 2 for high school and junior college signees.
Posted by High Plains Pundit on December 16, 2021

Email ThisBlogThis!Share to TwitterShare to FacebookShare to Pinterest
Tags: Sports