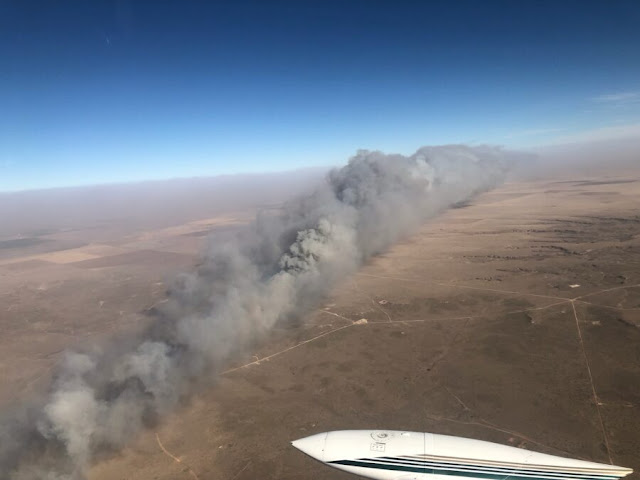 Very strong winds in Kansas and the panhandles of Texas and Oklahoma caused wildfires to spread very rapidly Wednesday. Blowing dust also caused severe visibility problems, and prompted the street lights to come on at noon in at least one area.
Texas
Fires in the Texas panhandle were spreading to the east-northeast on Wednesday, also pushed by very strong winds gusting over 80 mph.
The North 207 Fire in Carson County has burned an estimated 15,000 acres about 5 miles southeast of Borger. The Texas Forest Service said it has crossed Highway 152.
The Parker Creek Fire started in Oldam County and spread into Hartley County southeast of Channing, about 14 miles south of Dumas. The TFS said at 6:08 p.m. it had burned 3,500 acres but satellite heat data indicates it could be larger.
Texas Governor Greg Abbott directed the Texas Division of Emergency Management (TDEM) to ready and activate resources ahead of elevated conditions for fire danger in the Texas Panhandle and South Plains. These resources will support local officials' response to wildfires if fires exceed local capabilities.
The Texas A&M Forest Service warns that wildfire-prone conditions caused by underlying drought aligned with dryness, increased wind speeds, freeze cured grasses, an abundance of vegetation on the landscape, and elevated to critical fire weather are expected to become progressively more hazardous in the Panhandle and South Plains.
"The State of Texas is fully prepared to assist communities in the Panhandle and South Plains that are at risk of potential wildfire activity this week," said Governor Abbott. "We will continue to coordinate with local partners and monitor fire conditions to ensure resources are readily available, and I encourage Texans to heed the guidance of local officials and take proper precautions ahead of potential fires."
The following resources were deployed through the Texas A&M Forest Service: two Texas Intrastate Fire Mutual Aid System (TIFMAS) strike teams, including 50 firefighting personnel and 10 fire engines; three Single Engine Air Tankers (SEATS); and one air attack aerial supervision aircraft. The following resources have also been readied to be deployed if necessary: six Texas Intrastate Fire Mutual Aid System (TIFMAS) strike teams with 150 personnel and 30 fire engines.
Oklahoma
Due to the Cobb Fire in the Oklahoma panhandle the Guymon Police Department in a 2 p.m. Facebook post on Wednesday encouraged the residents on the northwest side of town to evacuate. Heat data from satellites at 1:55 p.m. CST indicated it had burned approximately 5,000 acres northwest of Guymon. The Oklahoma Forest Service said at 7 p.m. it had grown to about 10,000 acres. The eastward progression toward Guymon had been stopped, they said, and one structure was destroyed. Wind gusts up to 79 mph were recorded in the area.
Kansas
There are also numerous fires in western Kansas, also pushed by strong winds out of the west measured in at least one location at 100 mph. The New York Times reported that two fires merged in Russell and Ellsworth Counties in the central part of the state to form a massive blaze about 40 miles long, according to Eric Metzger, a meteorologist with the National Weather Service.
Posted by High Plains Pundit on December 16, 2021
Tags: Regional