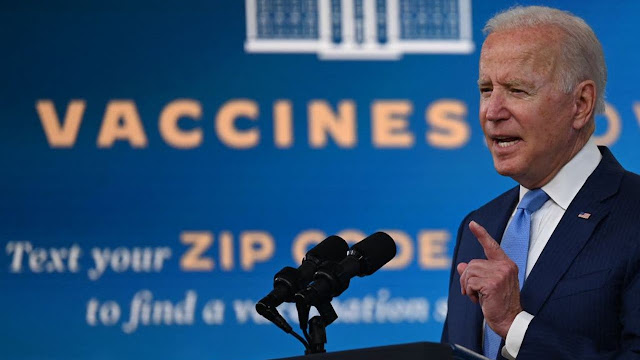 State legislatures will consider a host of new challenges to the Biden administration’s mandates that workers in some settings be required to receive vaccines against the coronavirus, setting up a new front in the tug of war that is already being fought in federal courts across the nation.
Several states have already approved new measures meant to circumvent federal vaccine orders.
Florida Gov. Ron DeSantis (R) last month signed a bill that would bar private employers from enforcing a vaccine mandate and expand the number of exemptions that employees could use to evade requirements. The law imposes fines of $10,000 on small businesses and $50,000 on large businesses that mandate vaccinations, while barring educational institutions from requiring vaccines or implementing mask mandates or quarantines.
Kansas Gov. Laura Kelly (D) signed a measure last month that would add new exemptions for employees who do not want to get a vaccine. Tennessee Gov. Bill Lee (R) approved legislation last month to prohibit employers from mandating a vaccine, with an exception for those firms that would lose out on federal funding if they do not.
As states prepare to return to legislative session in January, many are preparing similar bills. In Arizona, a powerful Republican state senator is crafting legislation using Florida’s measure as a model.
“It’s just a bridge too far,” state Senate President Pro Tempore Vince Leach (R) said of the federal mandates. “I’m running a bill that will mirror Gov. DeSantis’s bill that they just passed in Florida on mandates, subject to the Constitution and what we have in Arizona.”
Kansas Senate President Ty Masterson (R), who shepherded his state’s vaccine exemption bill, said he had fielded phone calls from colleagues in other states who were interested in pursuing their own exemptions.
“Those conversations happen. What was significant about us is it was even done amid divided government, right? Republican legislature, Democrat governor,” Masterson said. “We just want to land fully on individual liberty and thread the needle where these businesses that are afraid because they might have a federal contract or an OSHA threat.”
Legislators in Ohio, Indiana and South Carolina have all made progress on bills expanding exemptions, though those bills have yet to win final approval. At the same time, Republican attorneys general in many states have filed suit challenging the federal mandates.
States cannot unilaterally dismiss or block a federal vaccine mandate on their own, said Sara Rosenbaum, a health law and policy expert at the George Washington University’s School of Public Health and Health Services. But the states argue that the federal mandates overstep an authority that should be theirs, under the 10th Amendment.
“The state’s theory obviously is that the federal government doesn’t have the power to do this, and they have the power. When it comes to immunizations, their power under the 10th Amendment is supreme,” Rosenbaum said in an interview. “If a vaccine is not mandated at the federal level, then states can do whatever they want to do. When it comes to Medicare and Medicaid providers, the federal government has always had the power to do this.”
All three of the vaccine mandates imposed by the Biden administration have been put on hold. A federal judge in Georgia, appointed by former President Trump, paused a vaccine mandate for employers of federal contractors. A federal judge in Louisiana, another Trump appointee, issued an injunction against the Biden administration’s plans to mandate vaccines for health care workers.
The 5th Circuit Court of Appeals paused implementation of a rule requiring companies that employ more than 100 workers to mandate either vaccinations or testing.
The Centers for Medicare and Medicaid Services appealed the ruling out of Louisiana. The 5th Circuit case has been consolidated with more than two dozen other challenges to the mandate on large employers and shifted to the 6th Circuit. Those cases are all but certain to wind up before the U.S. Supreme Court.
Posted by High Plains Pundit on December 15, 2021
Tags: National