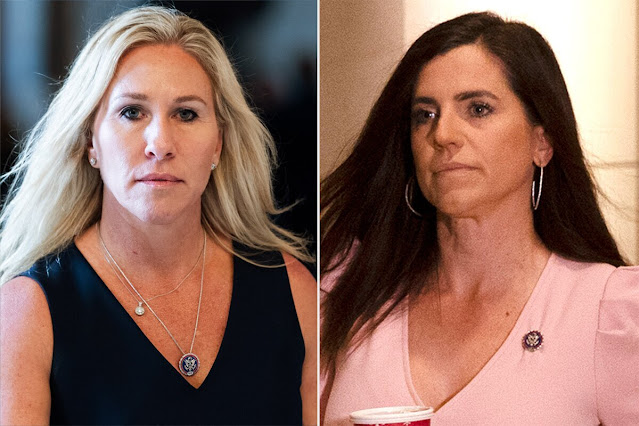 When historians look back on the first quarter of the 21st century, it's a good bet that social media will be judged a net-negative for politicians of both parties.
Exhibit A comes in the form of an online feud between Reps. Marjorie Taylor Greene (R-Ga.) and Nancy Mace (R-SC.). This wasn't your typical disagreement over public policy. This was a “Mean Girls”-esque exchange, with Greene referring to Mace as "trash" and Mace retorting with explicit emojis to describe her intra-party adversary as “crazy.”
The pointless war of words rightly generated headlines and certainly got the attention of House Minority Leader Kevin McCarthy (R-Calif.), who privately urged his members to stop feuding ahead of the 2022 midterms, now only 11 months away.
But "trash" seemed to drive the news cycle, as two other congressional Republicans, Rep. Lauren Boebert (R-Colo.) and outgoing Rep. Adam Kinzinger (R-Ill.) slammed each other. Boebert had decided it was a great idea to publicly infer that Rep. Ilhan Omar (R-Minn.) is a terrorist, prompting Kinzinger to describe her in all-caps as “TRASH.” Boebert subsequently apologized and reached out to Omar in a phone call that went nowhere quickly, according to both parties.
The list of disparaging comments goes on, but you get the point: GOP House members seem to be fracturing more each day. It's ugly and pointless and something out of teenage drunk-dialing, except that this is playing out in front of millions on social media and is driving cable-news segments.
All of this comes as Republicans should be planning what to do if they retake control of Congress after the 2022 midterm elections, thanks to President Biden dragging down his own party with the worst drop in presidential poll numbers since World War II.
The 46th president is close to 10 points underwater in the RealClearPolitics average overall and is losing independents at an alarming rate. On the economy, crime and immigration, he's in the 30s and 20s for approval — and that’s just some of the issues on which his administration appears incompetent or worse. He’s even polling underwater on his administration’s response to COVID-19, an issue on which he was at +30 points approval as recently as this summer.
The GOP is on track to gain 40, 50, 60 or more seats next November; it needs to flip just five seats to retire Nancy Pelosi as House speaker. Given that Barack Obama lost 63 congressional seats in the 2010 midterms despite ramming through ObamaCare and given that Donald Trump lost 43 seats in 2018 despite ramming through tax cuts, the safe bet is that Democrats will lose not only dozens of House seats but perhaps even the Senate, now in a 50-50 split.
Yet some Republican House members simply can't discipline themselves to stay off Twitter and stick to the issues, to make common-sense arguments on how to fix the myriad problems created or exacerbated by Biden, Pelosi and Senate Democratic Leader Chuck Schumer (D-N.Y.), who all seem to believe that passing bills with trillions in new spending will lower inflation and decrease the deficit.
Social media is a look-at-me megaphone for more than a few lawmakers of both parties who draw attention to themselves through snarky, provocative tweets. It isn’t just Republicans, of course. Rep. Eric Swalwell (D-Calif.) launched a presidential campaign largely off of being a Twitter troll and an MSNBC darling.
The same goes for Rep. Alexandria Ocasio-Cortez (D-N.Y.), who has received more media attention for doing less than any other member in recent congressional history. Why? Largely for over-the-top tweets like one claiming that Supreme Court Justice Brett Kavanaugh "remains credibly accused of sexual assault on multiple accounts with corroborated details" and somehow tying that to the court hearing arguments on abortion. It's enough to make your hair hurt.
According to a study by the non-partisan Center for Effective Lawmaking at Vanderbilt University, Ocasio-Cortez is one of the least effective lawmakers in Congress. Among Democrats, she ranked 230th out of 240; she ranked last among New York’s 18 congressional Democrats.
No matter: CNN gave her a primetime documentary called "Being AOC." Time Magazine dubbed her "The Phenom" on one of its covers and New York Magazine committed multiple writers to pen essays talking about everything from her beauty to her authenticity to – you guessed it – her social media "greatest hits."
Where does all this media love stem from? Mainly her ability to insult others (including fellow Democrats) on Twitter and Instagram.
But the focus at the moment isn't on Democratic infighting — it’s on Republicans. (That could change when the Senate pares Biden’s Build Back Better bill even further, and House progressives once again voice their displeasure.)
Social media is the worst thing that’s happened to political debate. It's too easy to criticize others on the most personal terms, in ways that make junior high students look mature. The provocateurs score cheap points and get news coverage embracing the snark.
Right now, a few members of the Trumpian wing of the Republican Party are getting their time in the spotlight by doing this. They were sent to Washington to solve problems, to help make lives better for others. Instead, we’re getting sound and fury in the form of social-media disrespect and scorn.
And Congress wonders why its approval rating is down 15 points since earlier this year, from 36 percent to 21 percent overall.
Americans are tired of lawmakers making themselves the story. They want them to do their jobs, get to work, grow up — and get off of Twitter.
Posted by High Plains Pundit on December 03, 2021
Tags: Opinion