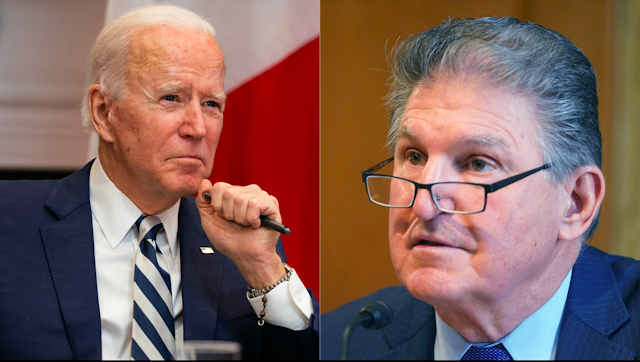 Sen. Joe Manchin (D-W.Va.) on Monday signaled concerns about inflation and the cost of the Build Back Better (BBB) legislation, ahead of a phone call with President Biden on the bill.
"Inflation is real, it's not transitory. It's alarming. It's going up, not down. And I think that should be something we're concerned about. And geopolitical fallout," Manchin said, referring to Russia's buildup on the Ukrainian border.
"These are all concerns. ... The unknown right now is very, very great," he added.
Manchin's Monday phone call with Biden comes as Senate Democrats want to pass the social and climate spending bill by Christmas. But in order to meet that deadline Biden needs total unity from all 50 Senate Democrats.
Manchin hasn't committed to the timeline, noting that he doesn't control the floor schedule, and hasn't yet said if he would vote to start debate on the spending legislation.
Manchin, asked if he would tell Biden during their talk if he wanted to pass the bill this year, sidestepped.
"I know people have been in a hurry for a long time to do something, but basically I think we're seeing things unfold that allows us to prepare better," Manchin said.
Democrats have made changes to the spending bill to try to address Manchin's concerns on energy and tax policies, and key committee chairmen have said that they are talking to him on a near daily basis.
But Manchin has warned for months that he has significant concerns about inflation and the cost of the bill. Economic data released on Friday found that inflation was at a nearly 40 year high, though the administration has tried to pitch the bill as being anti-inflationary.
A separate Congressional Budget Office (CBO) report requested by Republicans found that the bill would cost an additional $3 trillion if all the programs included under the legislation are made permanent.
Democrats bristled over the GOP-requested CBO report, arguing that Republicans had requested an analysis on a bill that didn't exist. Graham, during a press conference on Friday, made it clear that he was hoping the data would impact Manchin's thinking.
Manchin added on Monday that the new economic data was "very sobering."
"We're going to talk about exactly what happened on Friday with the CBO score and inflation reports and things of that sort," he said about his phone call with Biden.
Posted by High Plains Pundit on December 13, 2021