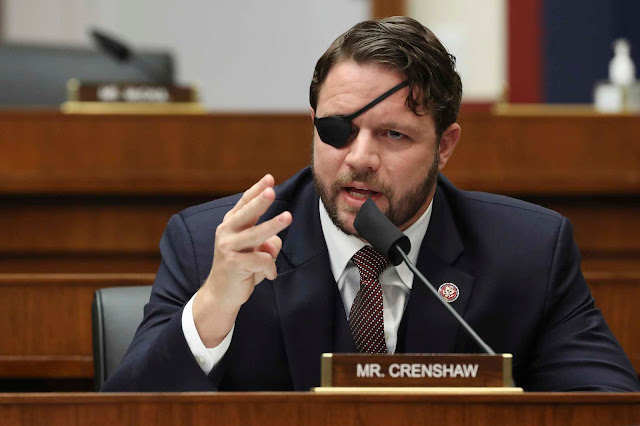 Rep. Dan Crenshaw (R-Texas) called out members of the House Freedom Caucus, referring to them as “grifters” and “performance artists.”
Speaking at an event hosted by the Texas Liberty Alliance PAC over the weekend, Crenshaw said the current conservative movement has “grifters in our midst.”
“Lie after lie after lie because they know something psychologically about the conservative heart: We’re worried about what people are going to do to us, what they’re going to infringe upon us — that’s the nature of conservatism,” Crenshaw said at the event.
Crenshaw added that his current criticism was directed at the House Freedom Caucus, referring to its members as "performance artists" who "get all the attention."
The House Freedom Caucus includes Reps. Mo Brooks (R-Ala.), Matt Gaetz (R-Fla.), Louie Gohmert (R-Texas), Paul Gosar (R-Ariz.) and Marjorie Taylor Greene (R-Ga.), according to The Washington Post.
“They’re the ones you think are more conservative because they know how to say slogans real well,” Crenshaw said. “They know how to recite the lines that they know our voters want to hear.”
Crenshaw also accused the members of the caucus of not voting for any items in former President Trump’s agenda, noting that Rep. Adam Kinzinger (R-Ill.), a vocal critic of Trump, voted “99 percent” of the time on Trump’s proposals.
The House Freedom Caucus was created by conservative Republicans in 2015 in response to their party making legislative compromises with Democrats and the Obama administration, the Post reported.
Posted by High Plains Pundit on December 07, 2021
Tags: Texas